The weather (and conditions) weren’t the most ideal for hiking. We initially planned to spend the weekend up north snowshoeing, but with a freezing rain warning in effect and a heavy snowfall on the forecast for later in the afternoon, we decided to stay close to home.

Last weekend we had a snowstorm (and first snowfall of the year). Given all the rain we had earlier this morning, we were a bit concerned of the conditions on the trails. But despite the rain, we forced ourselves to still go hiking. We went to the Rouge National Urban Park, which is the largest urban park in North America. The park features a number of trails through wetlands, forests, meadows, and along the coast of Lake Ontario. Even though it’s only a 25min drive from where we live, we have yet to visit this urban park.

We first hiked along the Vista Trail (3.2km), which features a two-level viewing platform overlooking the forest. We brought our snowshoes with us, but upon closer inspection of the trail, we figured they would be useless as much of the path was a slushy mess. The plus side is that we really tested the waterproofness of our winter hiking boots.

The trail was relatively flat. And dodging around the massive pools of water added an extra challenge to the hike. There were a few nice viewpoints along the way though. 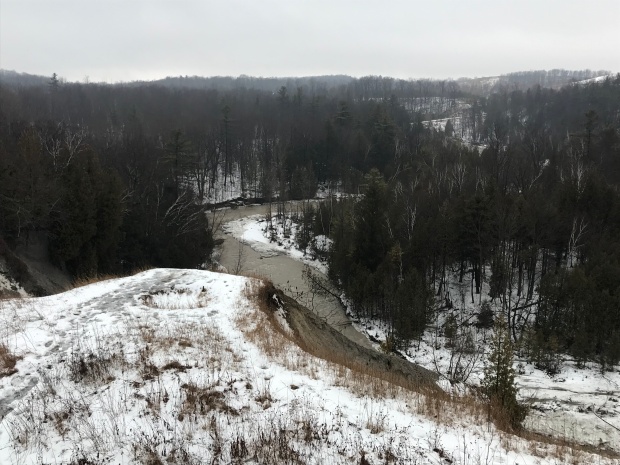 Another interesting feature of the hike was that the trail passes under some hydro lines. Nothing says nature better than listening to the buzzing hum from power lines.

The trail was marked with white blazes, but could have benefited from additional signage as it wasn’t clear where the trail actually ended. We turned around when we realized that we were walking along a different trail and headed back the way we came.

Since we still had some energy we decided to check out the part of the park near the waterfront. From the parking lot we walked along the Rouge Marsh Trail (500m one-way), a paved path that features great views of the largest remaining wetland in Toronto.

The trail ends near the shoreline of Lake Ontario and connects with the Waterfront Trail. We walked along the paved path which runs parallel to the lake, and watched the waves pound the shoreline. We turned around after a few kilometres as the wind was unrelenting and we were starting to get cold. And it was starting to rain again. We circled back to the car and headed home.

It wasn’t the day of hiking that we initially planned. But we got out there (despite the weather and poor conditions on the trail) and completed another day of hiking of the 52 Hike Challenge.

My progress on the 52 Hike Challenge can be found here