Bonaire is famous for being the best place in the world for shore diving. And it boasts of being home to one of the healthiest coral reefs in the Caribbean. Its reef encircles all 294 square kilometres of this tiny island making many of the dive sites easily accessible right from shore. There are 86 official dive sites, most of which are clustered around the western part of the island that is often sheltered from strong winds and rough currents. There’s a reason why this tiny island is often referred to as a diver’s paradise. 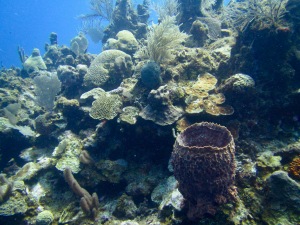 Tucked away off the northern coast of Central America, Roatan is the largest of the Bay Islands of Honduras and is reputed to be one of the best places in the Caribbean for scuba diving. The coral reef that encircles this quiet island is home to the second largest barrier reef in the world and is often a mere few hundred feet from shore. And while Honduras generally has a bad rap for its high crime stats, Roatan is considered relatively safe and is far removed from the dangerous crimes common on the mainland. With a healthy and diverse coral reef ecosystem, excellent visibility, affordable diving, and pristine sandy beaches, what more could you ask for in a vacation?

Mexico is one of the most visited countries in the world. With its warm climate, sandy beaches, mystical Mayan ruins and authentic Mexican cuisine, millions of tourists flock here each year to escape the coldest months of winter. While places like Cancun, Tulum, and Playa del Carmen are geared towards families and couples looking to relax along the beachfront in the safety of an all-inclusive resort, the small island of Cozumel boasts of being the safest part of Mexico and caters heavily towards divers.

Saint Martin is an island of two countries. The northern part of the island is French and the southern part is Dutch. You can move seamlessly between the two countries and both sides accept the same currency (American dollars). We opted to stay on the French side  along Orient Beach as it is reputed to be quieter and is farther away from the cruise port at Philipsburg. We stayed at Hotel Mont Vernon, which (contrary to its name) is not actually a hotel. Well, it used to be a hotel. But all the units are now privately owned. We rented a nice studio apartment that overlooks the ocean that we found on AirBnB. It was here on this small island of two countries where we breathed underwater for the first time and became PADI Open Water certified.