We somehow managed to convince my younger sister and her boyfriend how much fun it is to canoe to your campsite and rough it in the wild. Given that C & E aren’t avid campers (or canoers), we planned a route that wasn’t particularly ambitious. We were secretly hoping they’d have such a great time that they’d want to go backcountry camping with us again.

Despite taking Friday off work, we severely underestimated how long it would take for us to drive to Algonquin, get our permit and canoes, and paddle out to find a campsite. It’s not as if our route that we planned was very challenging, there were no portages involved, but we somehow seemed to miscalculate the drive (and the traffic). It also didn’t help that we made a couple of stops along the way to meet up with C & E and to pick up some last minute supplies.

As we were nearing Huntsville, our window of daylight was fading. We made a last minute decision to just camp at Arrowhead Provincial Park for the night and head over to Algonquin first thing the next morning. We booked the (second last) site online. We still drove into Algonquin to pick up our permit and check in to get our paddles and life jackets to make things easier for Saturday morning.

When we arrived at our site we set up our tents and started a fire to make dinner. We went to bed reasonably early so we could get an early start to our day on Saturday. Turns out Arrowhead has quite the party scene and we weren’t able to get much sleep.

Despite having a restless night, we managed to still get up early. The weather forecast was calling for a thunderstorm early in the afternoon and we were hoping to reach our site before it started raining. From Arrowhead it’s about an hour and a half drive to get to the access point for Galeairy Lake.

Our canoes were supposed to be waiting for us down by the water. When we checked in with Algonquin Bound yesterday, they gave us our canoe numbers and indicated that our names would be written on masking tape on the bottom of the canoes. Well, they weren’t. We spent about an hour and a half on the phone going back and forth with the canoe rental place to get the issue sorted out. Eventually they sent someone down to confirm that our canoes were actually missing (why would we make this up?). Luckily she had a couple of canoes in the back of her truck, which she let us use instead.

By the time we loaded up our canoes and hit the water it was shortly after 11a.m. So much for trying to get an early start to the day.

Midway through our paddle it started to rain. Despite the rain, the issue with our canoes and that we were all sleep deprived, everyone was still in pretty good spirits. We even managed to have a few laughs along the way, largely at the expense of C & E who were also learning to canoe.

After paddling for about an hour and a half we found an available site, which was pretty amazing. There was a decent sized seating area (not that this mattered too much since we brought our own chairs with us – one of the perks to not portaging), a few flat spots for tents, and a large supply of firewood that the previous campers left.

The canopy of leaves managed to shield us from most of the rain. Concerned that it would continue raining, we started a fire. The rain subsided and we made a late lunch. C & E set up their tent, but we decided to wait it out in case it was supposed to continue raining. This turned out to be a good call because just as we were finishing lunch, it started to rain again. Hard.

We hung up a large tarp so we (and our stuff) could stay dry. Despite the heavy rain, we managed to keep the fire going the entire time. We pulled out a few drinks from the cooler and just waited it out. Luckily, the storm was short-lived. Soon after it stopped raining, the clouds started to clear and we had lovely weather.

Early in the evening we went for a short canoe ride in the bay. The boys brought their fishing gear with them and E managed to catch a small fish. We watched the sun dip below the horizon before paddling back to our site before it got too dark outside. 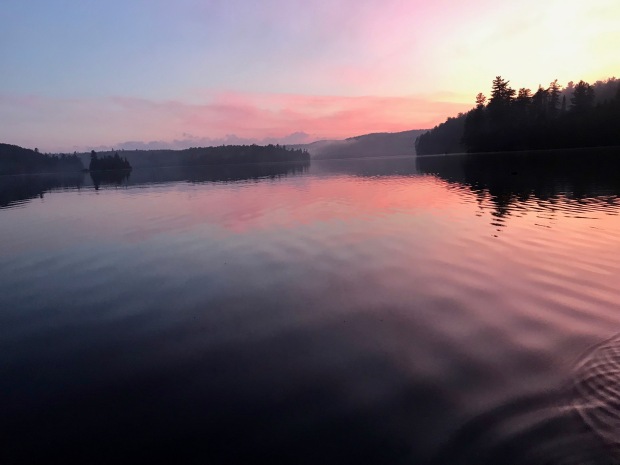 We woke up feeling very well rested. One of my favourite things about camping in the interior in Algonquin is that you get this sense that you are in the middle of nowhere. You don’t have to worry about having no privacy or being near loud campers. It’s just you and the lake. It’s very peaceful.

There was a thick layer of mist that clung to the surface of the water, creating an eerie atmosphere. 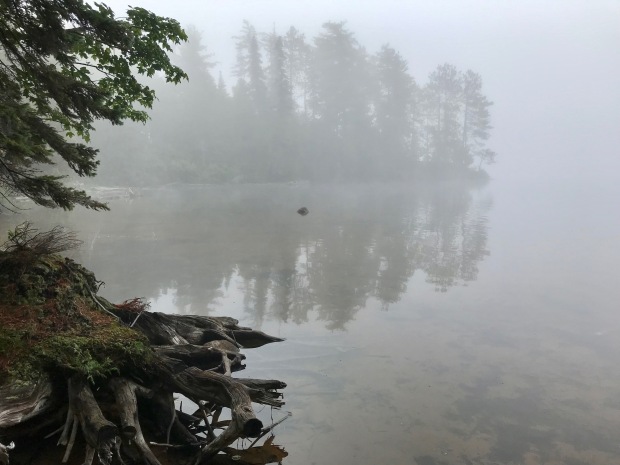 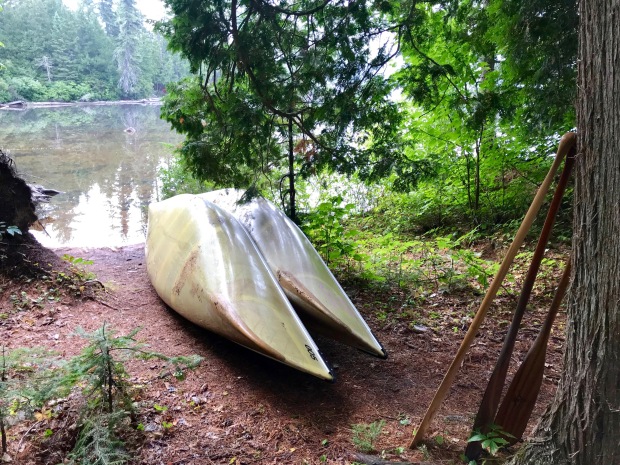 We spent the morning leisurely packing up our gear. After eating a big breakfast, we were ready to hit the water. At this point the mist had faded and we were left with blue skies and sun. Perfect paddling weather.

The paddle back was quite enjoyable. C & E were feeling much more confident in their canoe and were starting to get the hang of it (not so much with the steering though). After about an hour and a half we reached the boat launch and were back on the mainland.

Despite the delayed start, issues with our canoes and the rain, we still managed to have a great time. Even in terrible circumstances, if you’re with the right people, it can still be an enjoyable trip. Besides, C & E agreed to come back again next year. So to me, the trip was a success.

Return here for our complete list of Algonquin adventures.