Nestled within the Alps, this charming Austrian city offers breathtaking views of the mountains. Salzburg is also well known for its charming architecture (the historic centre of Salzburg is included as a UNESCO World Heritage Site), being the birthplace of the classical composer Mozart, and for the filming of (one of my favourite movies of all time) The Sound of Music. The hills really are alive with the sound of music.

Today was my birthday: I am 16 going on 17 (more like 31 going on 32). We woke up to a cold and rainy day. We were a little reluctant to leave Prague. Partially because Prague is oh so charming and largely because we weren’t all that excited to spend most of our day in transit. I really underestimated how long it would take to get from Prague to Salzburg. Turns out there are mountains in the way, so the journey isn’t exactly direct. Either way, if we’re going to spend much of the day on the train, might as well do it when the weather is miserable.

In the best of times, you can take the train from Prague to Salzburg with a transfer at Linz for journey time of just over five hours. But, since they were doing construction on the tracks, we were required to take a shuttle bus in between two of the stations. This resulted in massive delays. By the time we got to Linz, we had missed our connecting train. And the person who checked our tickets advised us to get on the wrong platform for the final leg of our journey. While the second (or rather, third) train we boarded did go to Salzburg, it was operated by a different company and our tickets were not valid. We had the option of getting off at the next station or purchasing new tickets. We opted for the latter since we weren’t really sure whether the train we were supposed to have boarded would even stop at the next station. And it was cold and wet outside. And it was my birthday. As you can tell, I was very whiny that day.

We arrived in Salzburg a couple of hours later than expected. And it was still raining outside. We walked to our hotel and checked in. By the time we got to the historic centre, most of the main attractions were closed for the day, with the exception of the Salzburg Cathedral, easily the most impressive church in the city. 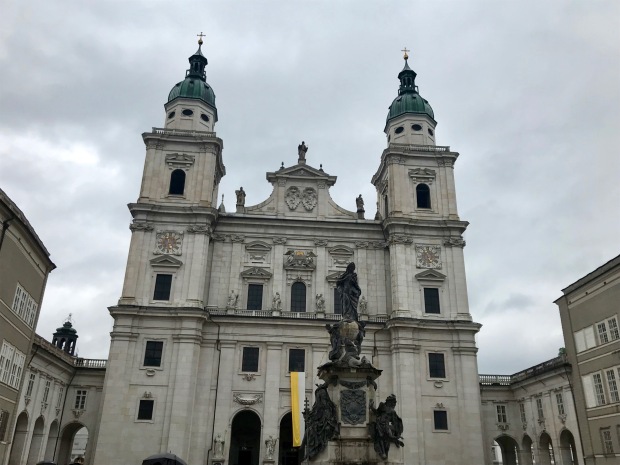 We wandered around a bit more before finding a place to eat for dinner. Despite sitting on a train (or bus) for most of the day, we were pretty exhausted. Tomorrow is another day.

Day 2: The sites in Salzburg

We woke up to another cold, wet, and dreary day outside. After eating some breakfast in our room we set off with our umbrellas to explore the attractions in Salzburg. We started our day off at the Hohensalzburg Fortress. It is perched high up on a hill above Salzburg and is one of the largest medieval castles in Europe. You can walk up the hill to get to the fortress, or for a few extra euros, take the funicular up.

Entrance into the fortress includes a self-guided tour by audioguide to learn more about the history and highlights. Construction of the fortress started in 1077 to fend off any attacks. Over the years the castle was expanded.

We then went to Mozart’s birthplace, located right in the heart of downturn Salzburg. Wolfgang Amadeus Mozart is considered to have been one of the best classical composers of all time. He spent much of his youth and childhood here on the third floor of this building back in the mid 1750s. The house has been converted into a museum and provides more information about Mozart and his family. There really wasn’t much to the house itself. There were a bunch of signs scattered around the various rooms that provided more of a closer look into Mozart’s life, but to be honest, we could have just read all that stuff on wikipedia. It was kind of a let down considering the cost. 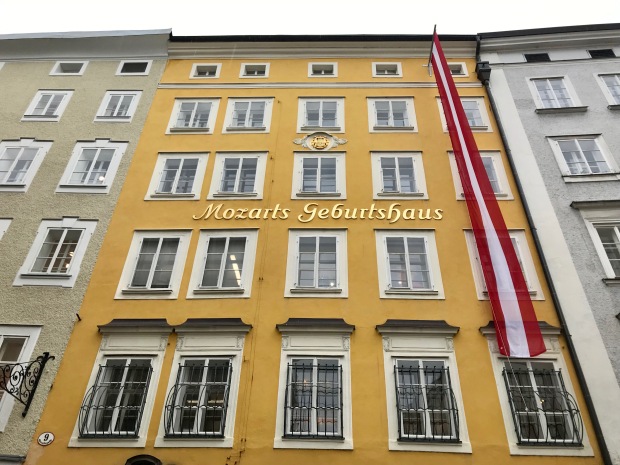 We headed back to our hotel room for lunch and an opportunity to warm up from the cold and dry off from the rain. It was still raining by the time we wrapped up our break, which wasn’t ideal as we planned to waltz around the Mirabell Garden. That iconic scene from the Sound of Music where Maria teaches the children to sing with “Do-Re-Mi” was filmed here. There is a palace located in front of the gardens, but the only area that is open to the public is a fancy staircase which leads to the Marble Hall, which has become a popular venue for concerts (and weddings).

We then walked to St. Peter’s Monastery, cemetery and catacombs. The church was closed for renovations, but we roamed around the cemetery. The cemetery is quite beautiful and was also used in the filming of the Sound of Music. The Trapp family hid here after the music festival before making their ultimate escape into Switzerland. We paid a few euros to go inside the catacombs, which were carved into the side of the mountains, and offered a nice view overlooking the cemetery.

We took another break from being outside in the cold and wet. And by the time we headed back out it had stopped raining and the clouds were starting to break. We took advantage of the change in weather and went on a hike up Kapuzinerberg, a small mountain along the River Salzach. The mountain is 640m high and the first part of the path is all paved. Along the hike there are a few turnoff points that offer great views the Hohensalzburg Fortress. Along the way up there are ruins from an older fortress that once stood here. 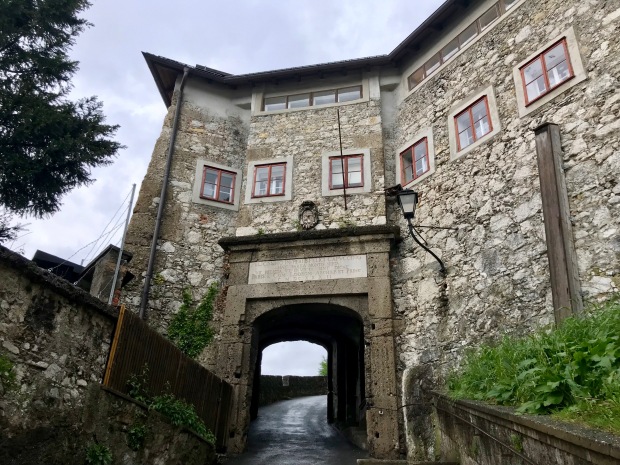 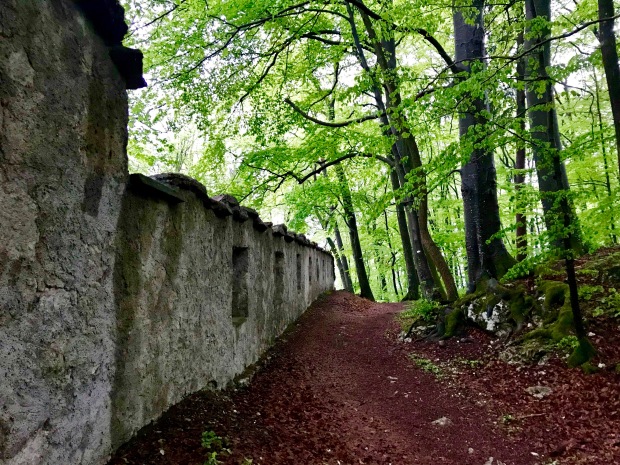 On our way back, we stopped at this lovely little Italian restaurant for dinner. They didn’t have a menu, but make three different types of fresh pasta each day. The atmosphere here was so charming and you could tell that most of the guests were regulars as they all knew the owner and servers. I had the best vegetarian lasagna of my life here. It was delicious (and surprisingly very affordable). We made a reservation for tomorrow night right on the spot.

Day 3: The sites just outside Salzburg

We took advantage of the beautiful weather today (no rain!) and rented a car to drive up into the mountains. Located about 50km south of Salzburg, lies the Hohenwerfen Castle. It is situated on a hill overlooking the little town of Werfen and is surrounded by the mountains.

You can only view the interior of the castle with a guided tour. The guided tours are offered a few times a day and only in German. We were provided an audioguide to follow along, but were required to stick with our group. Perhaps it was because today was a holiday, but our group was massive. And it didn’t help that the tour behind us, which consisted of a bunch of French high school students, kept merging with our group. This made things extremely painful, particularly towards the end when we all had to wait in line to climb one of the towers for a gorgeous view overlooking the grounds.

We were eager to leave the castle as soon as our tour ended. So much so that we decided to just walk down the hill back to the parking lot rather than take the funicular down even though it was included in our ticket. It was probably faster going down by foot anyway. And at least this way we didn’t have to deal with the crowds of people.

Located nearby is the Eisriesenwelt, which boasts of being the largest ice cave in the world. Today was a holiday and the first day that the ice cave was open for the season, so we expected this place to be busy. It surprisingly wasn’t, but this could be because getting to the cave itself is an adventure in and of itself. 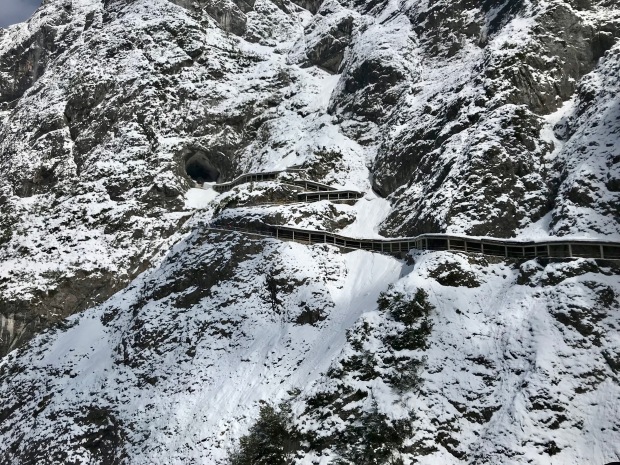 Tours start directly at the entrance into the cave and are offered at least every full and half hour with additional tours depending on the number of visitors. The tour is 70 minutes in duration. No special gear is required as you mainly just walk along a series of wooden planks and staircases that have been drilled into the ice and rock. Given that it is an ice cave, temperatures inside can be quite chilly. In the summer, a cold wind even blows toward the entrance, thus preventing the ice from melting.

The ice formations in the cave are incredible, especially when they are illuminated. Technically you aren’t supposed to take pictures inside, but I managed to sneak one in on my phone real quick and surprisingly it turned out quite well (shhhh).

On the way back down to the parking lot, we stopped at the restaurant located at the top of the lift for the cable cars. We ordered some apple strudel to share and soaked in the views (and sun).

Once we got down from the cable cars we opted for the slightly longer, but more scenic hike to the parking lot. It was so much more enjoyable walking along this path than through the dim and dank tunnel. 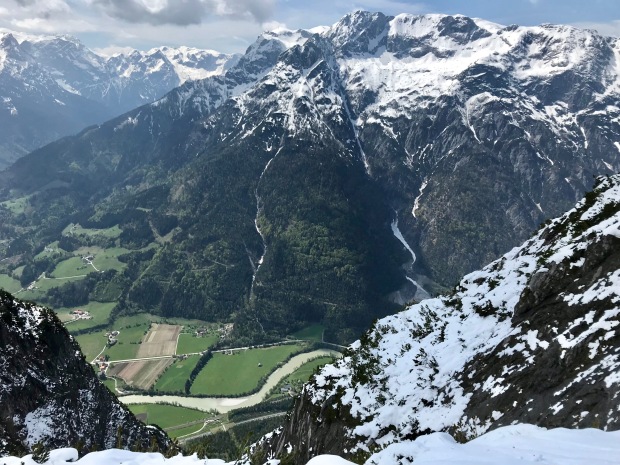 By the time we wrapped up our adventure we still had a couple of hours until we had to return our car. We decided to make a short detour to Liechtensteinklamm, a deep gorge in the Alps that you can walk through. Unfortunately it was closed due to a massive rockslide, which we only discovered after arriving here. We turned it around and drove back to Salzburg, returned our car, and went back to our favourite restaurant for more pasta and (too much) wine.

One thought on “Salzburg”