Point Pelee National Park is the southernmost point of the mainland in Canada. Despite being the second smallest national park (after Georgian Bay Islands, also located in Ontario), it boasts of being the most ecologically diverse national parks in the country. Point Pelee mainly consists of beaches, marshes, and woodlands. It is home to over 390 species of birds and is part of a bird and butterfly migration corridor over Lake Erie.

There are 24 oTENTiks (a cross between a tent and rustic cabin) available year-round within the park. And each is equipped with electricity and a wood stove. While we’ve always snickered at people who rent these yurt-type-things, we decided to try it out. Largely because it provided an opportunity to extend our camping season. So when we had a free weekend at the end of March, we headed down south to Point Pelee National Park.

We drove down to Point Pelee Friday after work and arrived at the campgrounds at around 10:30pm. It was raining outside, which wasn’t ideal. Especially since you have to walk in with your gear. Granted it’s not a far walk and there are wagons you can use to wheel your stuff in. We didn’t use the wagons though since they were wet, so we took two trips to lug our sleeping bags, pillows, cooler, and other gear from the car into our little cabin structure.

We slept in and took awhile to make breakfast. It rained all throughout the night and it was expected to continue for the remainder of the day. There was actually a rainfall warning for the area with forecasted rainfall amounts of 15-25mm by Saturday evening, which was later expected to turn into snow.

We first headed out of the park to pick up some extra treats and stuff to make dinner. Along the way back to the camp the rain had briefly subsided so we stopped at the Sanctuary Lookout.

We then stopped at Northwest Beach and walked along the sandy shores. There was this interesting mound of ice slabs that were pushed up onto the shore from the waves.

From there it was a short drive to the Marsh Boardwalk (1km loop). The boardwalk was under construction when we were visiting, so the observation tower that overlooks the marsh was closed off as well as a section at the end of the trail. So instead of completing a loop, we merely turned around and hiked back the way we came. Midway through the hike it started to pour. 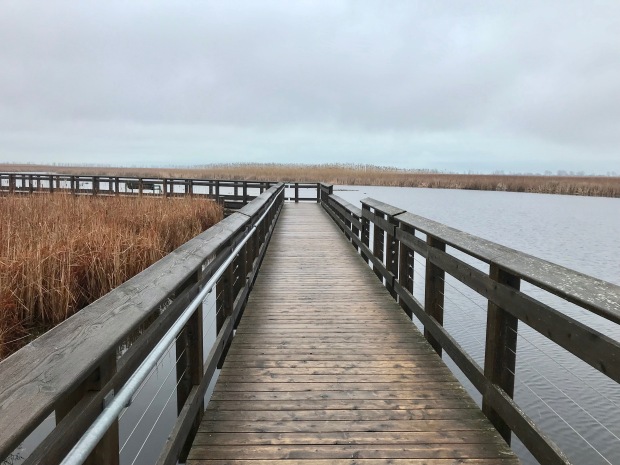 Once we made it back to the safety of our car, we headed back to Camp Henry to heat up some vegetarian chili in our cabin. Once the rain subsided, we headed back out for some more hiking.

The campgrounds are located near the visitor centre, which also marks the start of a couple of hikes. We first hiked along the Tilden Woods Trail (1km loop), which weaves through a mature swamp forest and cedar savannah. 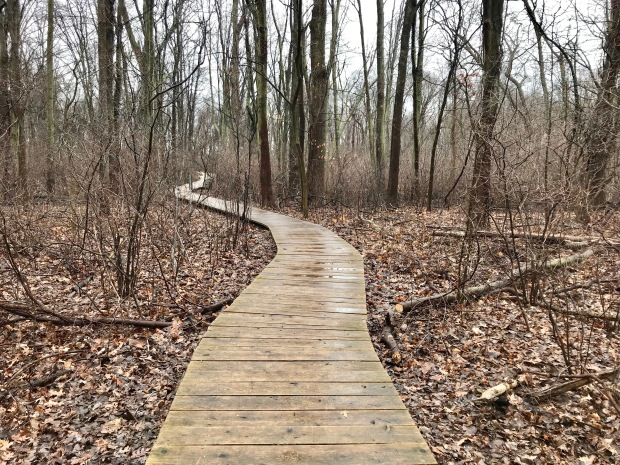 The trail intersects with the Shuster Trail (0.5km), which leads down to East Barrier Beach. We followed the detour and strolled along the sandy shores for a bit before circling back along the loop for the Tilden Woods Trail.

Once we returned to the parking lot, we decided to also hike along the Woodland Nature Trail (2.75km loop) since it also originates at the visitor centre. And it wasn’t raining. The trail winds through the oldest forest habitat in the park.

After finishing up our hike we checked out the visitor centre. By the time we finished up it was lightly raining outside. Given that the majority of the rainfall was supposed to occur in the late afternoon and evening, we decided to pack it in and head back to our cabin.We built a fire in the wood stove and spent the remainder of the afternoon and evening inside the cabin playing some games that we brought with us. One of the downsides to the cabin was that we had to open a couple of windows to allow for some airflow and to cool the place off. Either way, at least we were toasty warm.

Around 10p.m last night the rain turned into snow. Overnight the temperature plummeted below freezing. I woke up in the middle of the night a couple of times to throw another log or two on the fire. This morning when I woke up to use the washroom and stepped outside of the cabin, there was a thick layer of snow covering the trees and ground, creating this beautiful winter wonderland.

Since K wanted to keep sleeping, and I was so eager to frolic around in the snow, I repeated one of our hikes from yesterday along the Tilden Woods Trail (1km loop). There is a path from the campground that leads to the Tilden Woods Trail. It was a totally different experience hiking this trail after the snowfall.

When I returned to the cabin, K was up and about. We made some breakfast, cleaned up, and lugged our gear back to the car. We then drove south to the Tip of the peninsula – you know, the most southern point of mainland Canada. From April to October there is a shuttle from the visitor centre that you drops you off at the Tip’s outdoor exhibit. But, if you visit during the off-season, which is what we did, you can drive there on your own. From the parking lot, it’s a short hike along the Tip Trail (1km loop) to the Tip. It is here where the monarchs, dragonflies, and birds migrate in the spring and fall.

It was super blustery here and there wasn’t much protection from the wind. We walked up to the Tip, but didn’t linger long. We then raced back to the car. 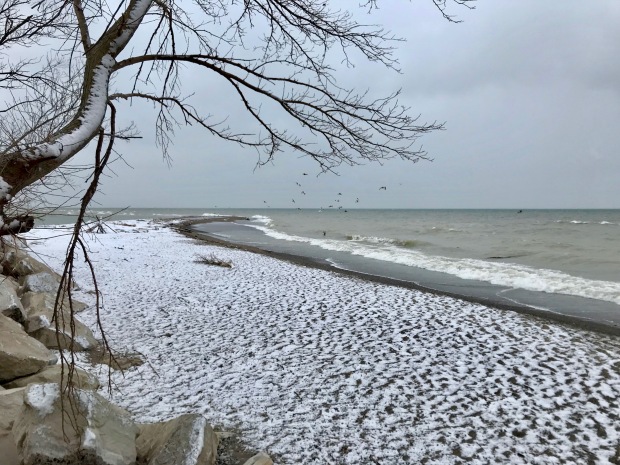 Afterwards we drove do the DeLaurier Homestead & Trail (1.2km loop) and hiked along an open field, cedar savannah and swamp forest. Towards the start of the hike lies the DeLaurier Homestead, a historic house and barn that is associated with the early settlement of the area of a small French-Canadian community.

Along the way back we made a detour along the Cactus Field Footpath for a change of scenery. The path is super short and loops back to the main path.

When we got back to the parking lot, we walked to the White Pine Beach. We didn’t stay long because once we left the cover from the forest, the wind picked up, and it got pretty chilly. 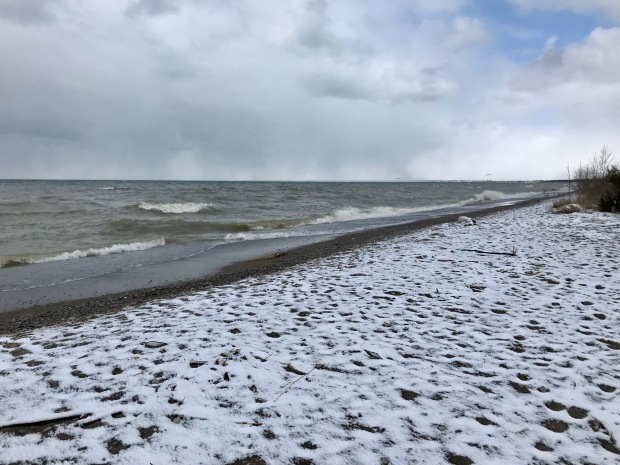 And that wrapped up all the hiking trails in the park (not including the bike path). But before leaving, we decided to hike along the Marsh Boardwalk again before heading home.

Verdict on the oTENTik: it was surprisingly pretty legit. We found it was quite spacious for two people and enjoyed the wood stove, electricity, and indoor seating area. It was also super convenient to not have to blow-up our air pads. This was definitely a good call given that there are no other camping options in the park, and it was the off-season. Oh, and the weather was junk. We’d definitely stay in another one of these cabins again, but probably not during the summer months.