We had such an amazing experience in Iceland back in June 2015 when we came for 20 days. So much so that I couldn’t pass at the opportunity to stopover in Iceland on the way to the Netherlands with two of my friends.

This time there was no midnight sun. And we were only here for four days. But we did manage to cover a lot of ground. We drove all the way up the southern coast to the Jökulsárlón glacier lagoon and back again. And we managed to catch a glimpse of the rare Northern Lights. All in all, the stopover in Iceland (in low season) was worth it.

I flew with Wow Air – a super budget Icelandic airline that offers affordable options to stopover in Iceland. For free. Sure, the airline nickel and dimes you for every single add-on imaginable (like reserving your seat, checking a bag, having an oversized carry-on, and for food and beverages) and there is no in-flight entertainment, but it just provided motivation to pack ultra-light. I managed to cram all my clothes and gear into a Wow Air regulation sized small carry-on of 42 x 32 x 52cm that weighed under 22 lbs.

The flight itself was fine. We were delayed by 30 minutes. But as soon as we boarded I plugged in my headphones and fell asleep. The cabin crew woke us up mid-flight with a special announcement that the Northern Lights were visible on the left side of the plane. And guess who was sitting adjacent to the window on the left side of the plane? Yours truly! I thought werewolves and other supernatural beasts were going to start popping up everywhere. It was seriously an incredible experience to actually witness them in person in real life.

We landed in Keflavic around 5a.m. Tired. But pretty pumped after seeing the aurora borealis. And even more pumped to start the day. It’s probably a good thing we had so much excitement because it was pouring rain outside. Ah, the Iceland I remember. We picked up our car rental from the airport and drove to a grocery store just outside Reykjavik. We had to wait about 45 minutes or so until the store opened, so we just napped into the car. It was a little chilly, but we were exhausted. We picked up supplies for breakfast and lunch before embarking on our tour of the Golden Circle.

First stop: Thingvellir National Park – the birthplace of parliament. There are a series of trails that lead upwards to get a nice view of the surrounding area.

Afterwards we drove to the Geysir geothermal area. The English term geyser was derived from Iceland’s Geysir. But don’t piss your pants with excitement, Geysir’s eruptions are infrequent and quite rare. But its neighbour Strokkur erupts every 4 to 8 minutes of heights of around 15 to 20m (and sometimes higher). There are also a number of hot springs and colourful hues in the area too. 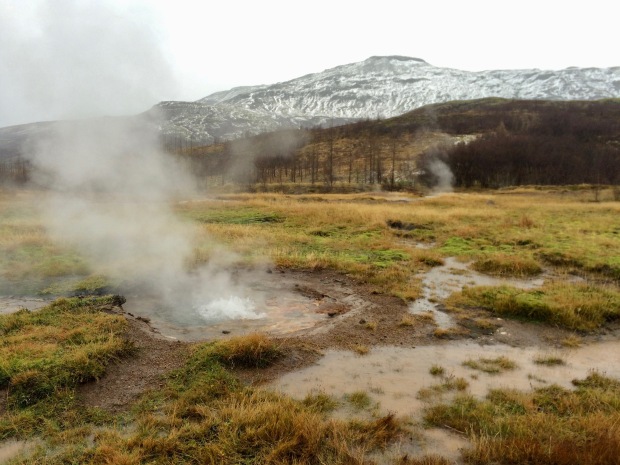 The last attraction we hit up on the Golden Circle was Gullfoss – an impressive waterfall that appears to fall into a hole in the ground in the middle of nowhere.

At this point our daylight hours were fading. So we called it a day and made our way over to our accommodations in Selfoss.

There is definitely a trade-off between visiting Iceland in the winter months vs. the summer months. The sun rose yesterday at 9a.m and set shortly before 5p.m. But getting such a late start to the day seemed so unnatural.

This morning we set off shortly after 9:30a.m to Seljalandsfoss. Despite coming to Iceland in low-season, there were a surprising number of tourists around. Even more so than we were here a year and a half ago back in June! There is a trail that leads behind Seljalandsfoss. It was quite windy so the spray from the waterfall was a little intense. But I was prepared! Rainproof jacket: check. Rainproof pants: check. 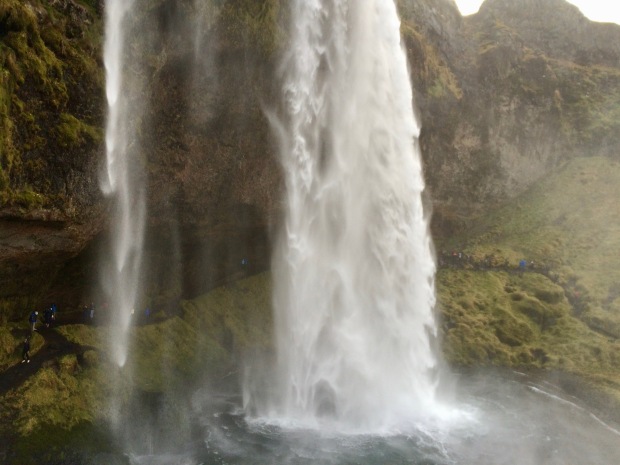 Afterwards we headed over to Skogafoss – another super impressive waterfall with another super impressive amount of spray. We forged through the wind and spray to get to the viewing platform at the top of the waterfall. The viewing platform up here also marks the start of a popular hiking trail to Thórsmörk. We hiked the beginning of the trail, which passes by an obscene amount of scenic waterfalls last time we were here in June 2015. But the wind was unrelenting. And the terrain was muddy. It just didn’t seem safe given the trail hugs the edge of the ravine. 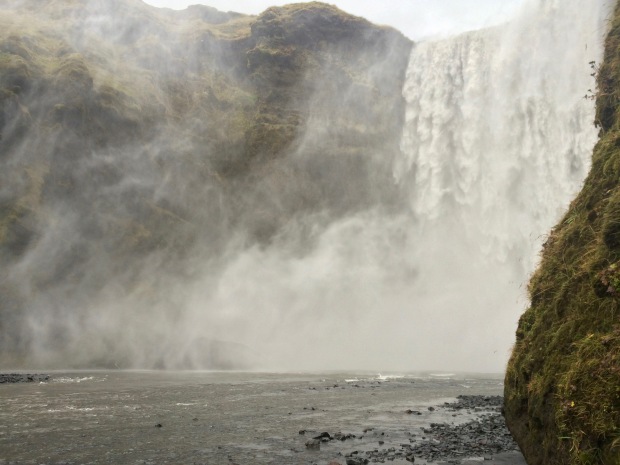 We were quick to get over our disappointment of not being able to hike part of the trail to Thórsmörk when we arrived at Sólheimajökull Glacier. This glacier is super accessible from the Ring Road. There is a paved path (now) leading up to a parking lot. From there it’s about a 15 minute hike to get to the tongue of the glacier. A tour group operates a variety of glacier adventures here. But you can get pretty close to the glacier without having to fork over a lot of dough for a guide and special gear. This is probably one of the most accessible glaciers ever. And you really don’t have to work hard to get such an up close experience!

Afterwards we continued along the Ring Road towards Vik. We made a quick detour at Dyrhólaey – an arch carved in the side of a cliff from the constant pounding of waves. There is a black sand beach here, but because the tide was high and the water was rough we could only take in the views from the viewing platform above.

When we arrived at our accommodations the weather was starting to clear up. We checked our Northern Lights forecast and conditions looked pretty good – low cloud coverage in the South East of Iceland and the forecast predicted a high level of aurora activity (level 4). For some reason we thought it was a great idea to set our alarm every hour on the hour from 11p.m to 4a.m to go on patrol for the Northern Lights. Yah, that was a terrible idea. Especially since our efforts didn’t pay off.

We were pretty tired from our failed attempts at an hourly Northern Lights patrol last night. But today marked our first day of no rain!

We piled into our car and continued driving east to our farthest destination: Jökulsárlón Glacier Lagoon. Along the drive we made a brief stop for some sheep dog that was herding a pack of sheep across the road. The driving in Iceland never gets old.

After that it was smooth sailing (or driving?) to the Jökulsárlón glacier lagoon. Runoff from the Breiðamerkurjökull glacier has created this lagoon filled with icebergs of varying shapes, sizes, and transparency that eventually flow out into the Atlantic Ocean. The beach, which has this beautiful black sand, is littered with icebergs. It is just such an incredible sight! We even managed to catch a glimpse of a seal near the shoreline!

After spending a couple of hours at the glacier lagoon we packed it up and drove back west along the Southern coast, stopping at Skaftafell National Park. We first hiked to Svartifoss. It’s a fairly short trail (3km roundtrip) that’s mostly uphill to get to this waterfall surrounded by black basalt columns. Along the way you pass by two other smaller waterfalls.

We returned to the visitor centre and headed in the opposite direction towards Skaftafellsjökull Glacier (it’s about a 4km hike roundtrip). Half the trail is paved while the other half is marked with signposts sticking out in the sand. It’s not nearly as impressive as the Sólheimajökull Glacier we visited yesterday, but viewing glaciers never gets old.

When we returned to the visitor centre the sun was starting to set. We hightailed it back to our accommodations and checked on the aurora borealis forecast. Conditions were similar to the previous evening – a low cloud cover and the Northern Lights were rated a 4 (out of 9) in terms of activeness (with 9 being the most active). This time we only went on our Northern Lights patrol once. We could see some activity, but only faintly.

Our final day in Iceland. And while we have yet to spot the Northern Lights (besides on our flight into Iceland), we were just pumped that it was our second day of sunshine!

We had a number of attractions listed on our itinerary for the day before hitting up the Blue Lagoon. So we rolled out pretty early. We first drove to Fjaðrárgljúfur – a canyon carved out by the constant flow of the Fjaðrá river. The canyon is up to 100m deep and is about 2km long. There is a short path (mostly uphill) that leads around the edge of the canyon. 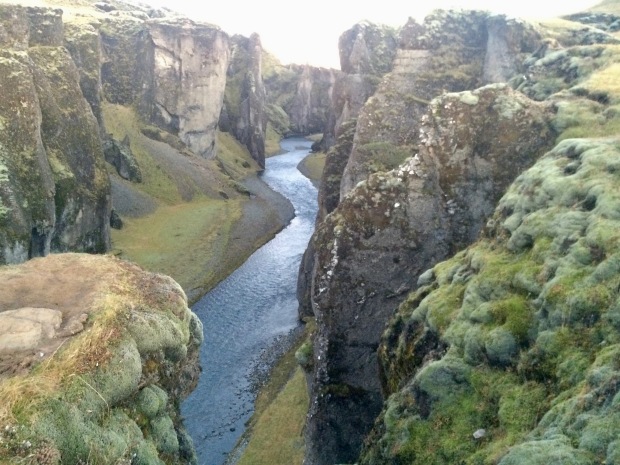 We piled back in the car and continued driving west along the Ring Road towards Vik. We pulled over at Reynisfjara – perhaps the more famous of the black sand beaches in the area. The beach follows the rugged shoreline where basalt columns are towering out the sand creating these amazing cliffs.

From there we drove back towards the southwest of Iceland. We checked into our cabin, grabbed our towels, and hit up the Blue Lagoon. We made our reservations in advance (which are now required) so when we showed up there was none of this waiting-in-a-line business.

The Blue Lagoon has expanded considerably over the past couple of years. Probably to accommodate the large spike in tourism. And sure, the local swimming pools are a small fraction of the price, but the Blue Lagoon is one of those things you just have to try once. Or in my case: twice. And I gotta say, visiting in the middle of the fall when it’s super freezing outside made the experience even more enjoyable. There was this perma-misty fog of warmth surrounding the lagoon.

After getting our fill of silica face masks and lounging around in the aqua blue mineral waters we emerged back onto dry land. We piled back into our car and drove over to Reykjavík. We stopped for a quick bite to eat before wandering around Iceland’s capital.

We didn’t stay out too late because of our early morning flight. And while four days really isn’t enough time to bask in all the amazingness that is Iceland, we were rather smug when we were departing because it was absolutely pouring the next morning. That’s one thing about Iceland I won’t miss: the rain.