Located along the eastern coast of Rhode Island, Newport was the place to vacation in the summer during the height of the Gilded Age in the late 1880s. Many of the most powerful and wealthy people – including the Vanderbilt – spent the summer vacationing in these insanely luxurious mansions. Some of these “summer cottages”, complete with their original furnishings and decorations, have been preserved and (for a small fee) are open to the public to catch a glimpse into the lifestyles of the rich and famous from over a hundred years ago.

From mid November to the end of December three of the eleven Newport “museum” mansions that are maintained by the The Preservation Society of Newport County are filled with these ridiculously beautiful holiday decorations – including a Christmas tree made entirely of poinsettias. So in anticipation of the holidays we drove down to Rhode Island from Boston (in the middle of a blizzard) to get our Christmas on at the Newport mansions.

We purchased a Winter Passport in advance which allows entrance into the Breakers, the Elms, and the Marble House. All for the price of $29.45 – which is actually a good deal considering entrance into a single mansion runs for $15.99 a pop.

We first went to The Breakers, which is arguably the most famous of all the mansions in Newport. Owned by Cornelius Vanderbilt II, it was named after the constant breaking of waves against the the edges of the cliff that overlooks the Atlantic Ocean. Entrance into the Breakers includes a free self-guided audio tour (around an hour long) that takes you through this elaborately decorated summer “cottage” complete with 70 rooms. And in December it is transformed with holiday lights and decorations, Christmas trees and poinsettias. 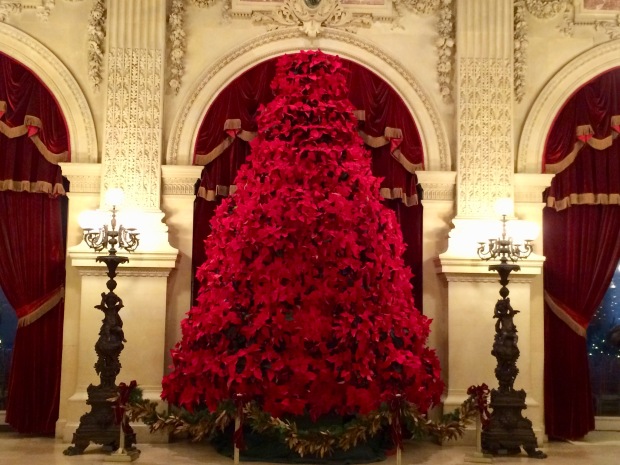 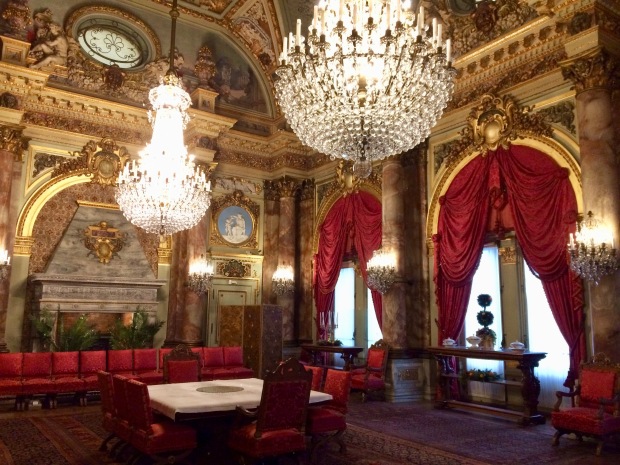 We then went to The Elms. Owned by the Berwind family, this summer cottage was almost torn down and converted into a parking lot in the early 1960s. But luckily the Preservation Society of Newport County stepped in and saved it. A few decades later it was then designated a National Historic Landmark. And while many of the original furnishings and decorations were not intact when purchasing the Elms, the Preservation Society has gone to extensive lengths to tracking down many of these articles. Included with your entrance ticket is a free 30 minute self-guided audio tour of the Elms.

Our final mansion included in our Winter Passport ticket was the Marble House, which as the name suggests, is covered in a lot of marble. William K. Vanderbilt, who is the younger brother of Cornelius Vanderbilt II (i.e. the owner of the Breakers) commissioned this summer cottage be built for his then wife Alva Vanderbilt for her 39th birthday. As with the other mansions, a complimentary 45 minute self-guided audio tour is included with your entrance ticket to learn more about the history of the Marble House.

After finishing up at the Newport mansions we continued driving south along the coast, stopping at Breton Point State Park. From here we were rewarded with a beautiful view of the Atlantic Ocean. No wonder all them wealthy folk wanted to build their summer cottages here. We can’t even begin to imagine what their “regular” homes were like. 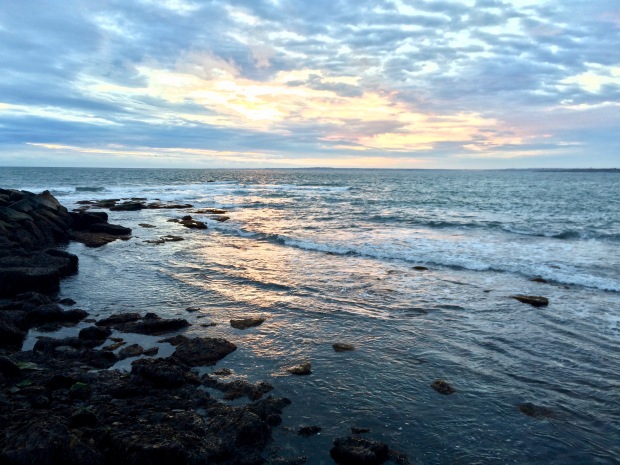 From Breton Point State Park we drove back to Boston and and left all the glitz and glamour from Newport livin’ behind.

2 thoughts on “Christmas at the Newport Mansions”