Arizona is home to one of the largest canyons in the world. Carved millions of years ago from the force of the Colorado River, it is 446km long, 29km wide and at its deepest is 1829 m from rim to the river. It truly is a sight to behold. But there are a variety of other attractions in Arizona’s red rock landscape and desert climate that are worth exploring as well.

We arrived in Phoenix late last night just before midnight. We then had another two-hour journey to get to our accommodations in Tucson. Perhaps it was because it was late at night and we were tired coupled with driving a rental car, but apparently we were driving with our fog lights on. And we only discovered this after being pulled over on the side of the highway by a cop. He kindly helped us correct our lighting situation before wishing us a safe journey.

Despite a late arrival, we woke up bright and early the next morning. We weren’t complaining about the early wake-up call as we were pretty happy to leave behind the dicey motel we stayed at. This is what happens when K arranges our accommodations. The one star rating was quite appropriate.

We started the day off at the Colossal Cave Mountain Park. Colossal Cave spans across 5.6km of mapped passageway. There are a variety of cave tours offered ranging from easy (Regular Cave Tour – a 50 minute guided tour that consists of walking along a paved path with built-in lighting throughout) to medium (Ladder Tour – an hour and a half guided tour filled with opportunities to explore away from the main path) to difficult (Wild Cave Tour – a four and a half hour tour that full-out explores the dark and hidden passageways off the beaten track). We settled for straight down the middle and signed up for the first morning Ladder Tour of the day.

Turns out we were the only people who had signed up for this tour. It was just us and our friendly guide Bill who is a retired biology professor that is just really into caves. He went through the geological and anthropological history of the cave while leading us through the winding passageways. The Ladder Tour involved straying from the main path, climbing up and down a series of (small) ladders and crawling through some tight spaces. One of the highlights from this tour was when we had to shimmy between two large rocks to get to a ledge on the other side. We regret not signing up for the Wild Cave Tour.

After eating some lunch we drove down to Kartcher Caverns State Park. We booked tickets in advance for the Rotunda-Throne Room Tour. The guided tour is an hour and a half long, but once you factor in the time it takes to ride the electric tram that shuttles you to and from the cave, you’re only actually inside the cave for about half that time. This tour was much less adventurous than our Ladder Tour at Colossal Caves as the entire path was paved and the cavern had lighting throughout. There was no need to have any special gear.

There were some pretty impressive cave formations and features – most notably the “Kubla Khan” – an 18m high column, which was accompanied by its own music and light show near the end of the tour. That part was a bit …questionable, but overall we still had fun. The caves here are very well preserved. Probably because they were hidden from the public for nearly a decade and a half after being discovered. They were then acquired by Arizona State Park and converted into a show cave that we see today. Unfortunately they do not allow pictures. 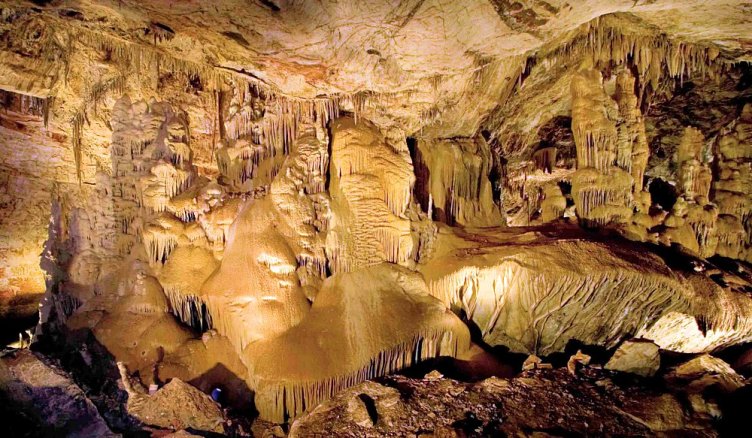 After our cave tour we hopped back in the car and drove for about four and a half hours to Sedona to get to our campsite. We marvelled at the desert landscape and all the different types of cactus along the way.

We rolled up to the Manzanita Campgrounds shortly after 8p.m. We managed to set up our tent (in the dark) just  before it started to rain. Excellent timing.

We woke up to a light dusting of snow outside our tent. In case you were wondering, there were other (crazy) people camping here too. This campground is one of the few that are open all year-long. Many of the sites back on to a nearby river. It is quite lovely.

Since we plan on visiting Utah next fall, we purchased an America the Beautiful annual park pass at the visitor’s center in Oak Creek Village. The pass allows entrance into the national parks and historic sites in the United States for a full year from month of purchase. The pass can also be used in lieu of a Red Rock Pass, which is required to park at most of the popular hiking trails in Sedona.

We decided to start the day off with a gentle 8km hike (round trip) along the Bell Rock Pathway and the Courthouse Butte Loop. There are two access points to get to the Red Rock Pathway – a northern trailhead and a southern trailhead. There isn’t much of a difference in terms of length required to reach the Red Rock Parkway so we ended up parking at the south trailhead since we passed that access point first.

The path is relatively flat and is wide enough to enjoy walking side-by-side – at least until you reach the base of Bell Rock. There is reputed to be an “energy” vortex surrounding the area, but all we felt was rain.

The path loops around Bell Rock and there is an option to continue onward to see both the Courthouse Butte and Spaceship Rock. 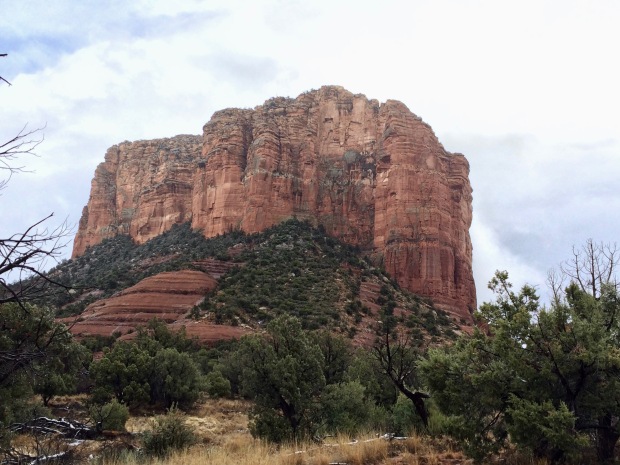 Luckily the rain subsided midway through our hike. We ate some lunch in the car and headed over to Cathedral Rock (2.4km roundtrip). It isn’t a particularly lengthy trail, but it is predominately uphill. And it involves scrambling up many steep rock faces. The hike to the saddle points was strenuous, but provided commanding views of these massive red rock formations. Climbing back down was interesting and involved a lot of sliding down rocks on our butts. 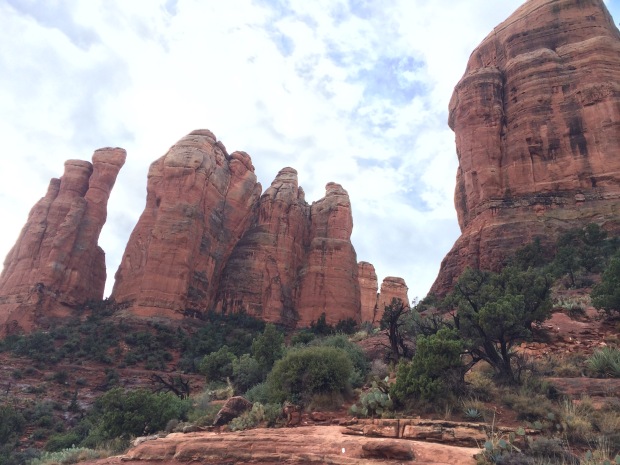 To take a break from hiking, we drove to Chapel of the Holy Cross, a church built into the face of the red rocks. This was probably the busiest “attraction” of our entire trip to Arizona (including when we went to the Grand Canyon). By the time we finished up here all signs from this morning’s rain storm had disappeared.

Our plans for the rest of the day were placed on hold because we got a flat tire.  We pulled into the nearest gas station where some kid who worked at the service center graciously helped us put on the spare tire. We drove to a couple of service centres to see they could patch the tire, but apparently the hole was unrepairable and would require a new tire entirely. We then contacted our car rental agency and discovered that flat tires were quite common in Sedona. They recommended trading vehicles at their nearest location, but unfortunately they were closed for the day. We instead drove back to our campsite and hung around there for the remainder of the late afternoon.

We swapped cars at the car rental agency first thing in the morning. We then made the two and a half hour journey up to the Grand Canyon. We first checked into our campsite at Mather Campground and then headed back out to check out the various scenic viewpoints along Hermits Road. Normally this road is closed to private vehicles during peak season (March – November) and visitors are required to take a free hop-on-hop-off-style shuttle bus. Visiting in low season defiantly has its perks.

Carved out millions of years ago by the of the Colorado River the Grand Canyon reveals all the power and beauty of the natural forces behind nature.

When we reached Hermit’s Rest at the end of the road, we hiked about an hour into the canyon along Hermit’s Trail. Definitely got the blood pumping after sitting in a car for most of the day. We didn’t want to out do ourselves because we planned to hike the South Kabob trail (22km roundtrip) into the canyon the following day. 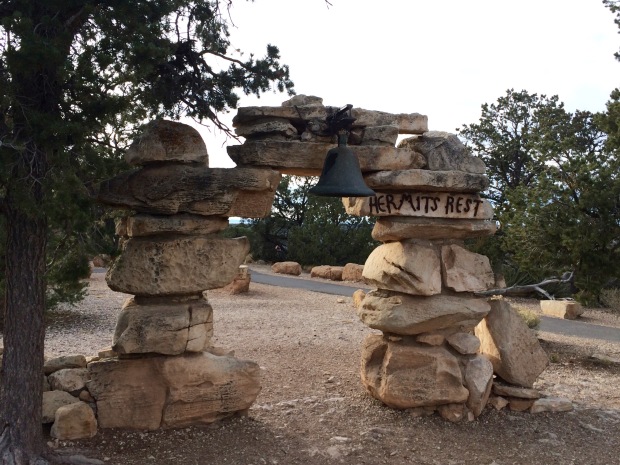 Afterwards we drove down to the Grand Canyon Visitor Center, watched the 30 min film about the canyon, and enrolled in the Junior Ranger Program (it’s not just for kids). We then walked a few meters to get to Mather Point, which offers breathtaking view into the canyon.

After finishing up we drove back to our campsite and ate some dinner around the campfire.

We awoke to over a foot of snow outside our tent. It was magical. And unexpected. And cold. Looks like we won’t be hiking along the South Kabob trail today! Or along any of the other trails for that matter. 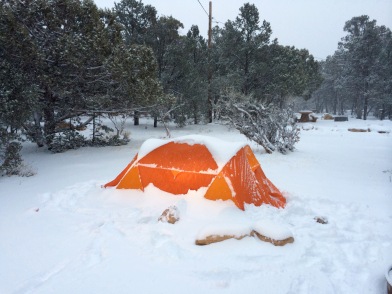 Instead we drove along the South Rim part way to Desert View. We managed to stop at a few of the scenic viewpoints before turning around due to the poor driving conditions. On the plus side, there were hardly any other cars on the road – not that it was overly busy the previous day, but when your car is a’slippin’ and a’slidin’ in the snow, it’s a good thing there isn’t many other vehicles around. 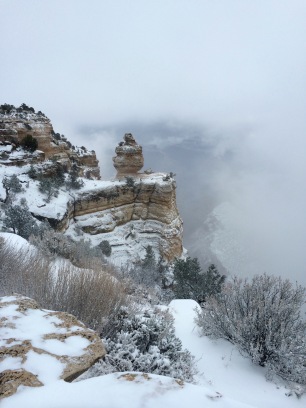 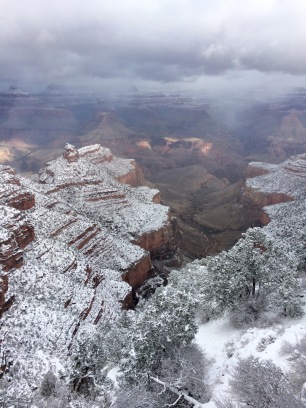 We headed back down to Grand Canyon Village to attend the Kolb Tour, which is apparently only open to the public from December to February. The tour was completely booked, but since two people didn’t show, we got to snag their tickets. The tour involved going through the Kolb studio, which was built into the edge of the canyon. We learned about the history of the Kolb brothers who came here in the early 1900s to make a living through photography. It was pretty neat. 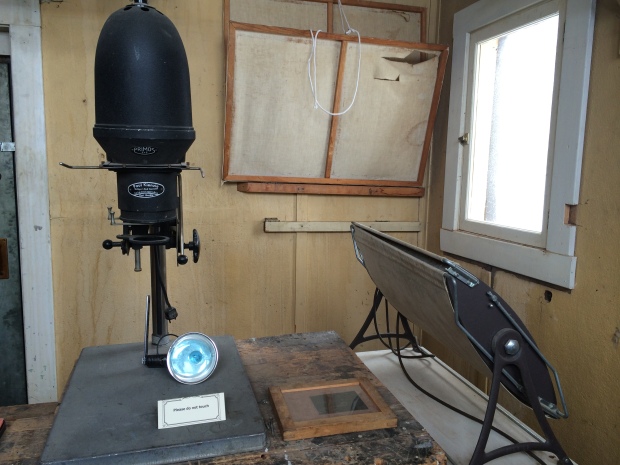 Since the snow wasn’t letting up by the time we finished the Kolb Tour, we decided to drive back down to Sedona in hopes of pleasanter weather. Even though Sedona got a massive snowfall, it had stopped snowing by the time we got there and temperatures were hovering around freezing. Ideal conditions for hiking along the Broken Arrow Trail (5km roundtrip). The snow definitely made the hike more enjoyable! 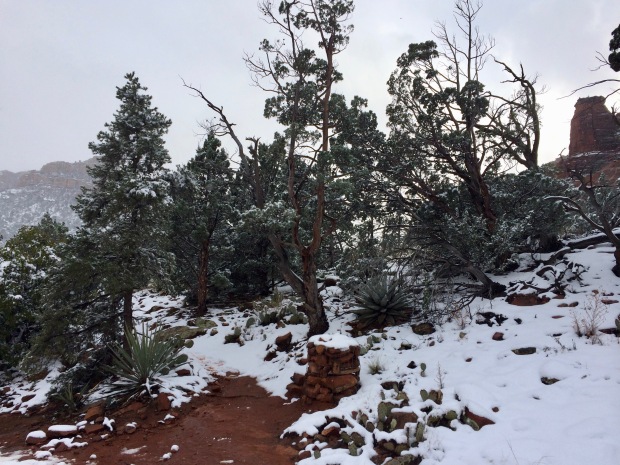 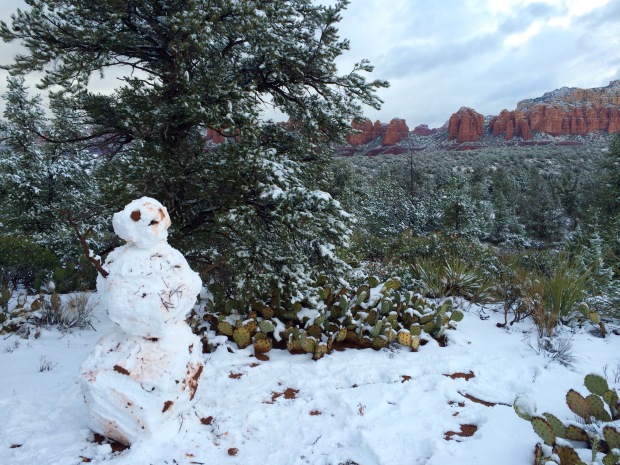 It was starting to get dark by the time we returned to our car and we wouldn’t have time to complete another hike so we decided to drive back down to Phoenix. We dropped off our car, checked into the airport a little early, and had a safe flight home. Despite being in Arizona for just four days we sure managed to cover a lot of (red) ground.