Connecticut, often referred to as the Constitution State or Nutmeg State, is the southernmost state in the New England area of the United States. It is the richest state per capita in terms of income and is also rich in historic culture. We visited Connecticut for two days over the Labour Day weekend to enjoy the final days of summer outdoors.

We woke up bright and early and left Boston shortly after 7:30a.m.  It took us nearly two hours to reach our first attraction on our two-day itinerary: the Mark Twain House. Even though Sam Clemens (who is more commonly referred to as his pen name – Mark Twain) lived all over the world his “home” is considered this house here in Hartford since he spent the longest amount of his life living here (17 years). It was inside this house where he also penned many of his famous novels including The Adventures of Tom Sawyer, The Adventures of Huckleberry Finn, Life on the Mississippi and the Prince and the Pauper.

Our ticket into the Mark Twain House and Museum included a guided tour (around an hour in duration) around the house and entrance into a small museum where visitors can learn more about Mark Twain’s life and legacy in greater detail. 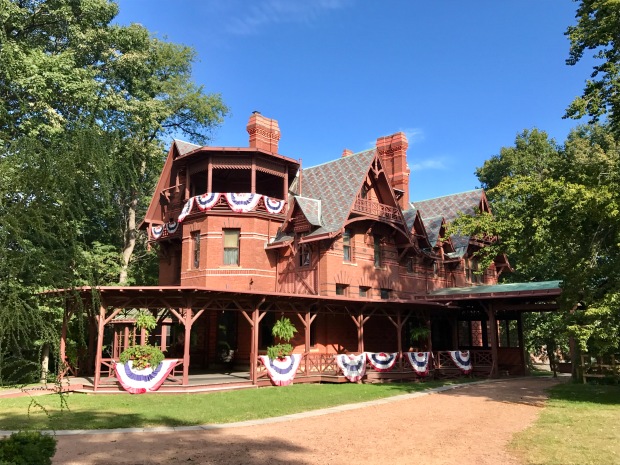 After finishing up our tour we continued driving south towards New Haven. We made a detour at the Lyman Orchards to pick some peaches and pears. With over 1,000 acres of farmland this orchard is typically one of the best orchards in Connecticut and has been in the Lyman family for 275 years. We picked up some (empty) plastic bags at the booth by the side of the road and ventured down into the orchards weaving between the rows of trees in search of the perfect fruit to fill up our bags.

In addition to being able to pick-your-own variety of seasonal fruits there are a number of family activities offered on the farm – including a massive corn maze that spans across 4 acres of land. We willingly forked over $10 each to test our navigational skills to escape from the maze. Thinking this maze would be a walk in the park and geared towards children we declined to take a map that was offered at the entrance.

There are also a variety of themed trivia sheets to further help navigate once inside the maze. There are ten signposts numbered one through ten in sequential order. Based on which trivia sheet you select (they range in level of difficulty depending on age and/or preference) when you come across a numbered signpost your answer to the corresponding question on your sheet will tell you which direction to proceed. We selected the Halloween themed trivia sheet, which was surprisingly pretty challenging. 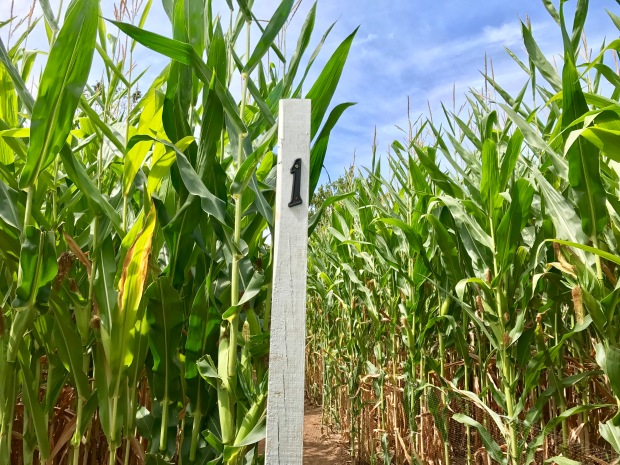 The maze becomes progressively harder the further in you get. It was definitely not a walk in the park. We felt pretty pleased with ourselves when we finally stumbled upon the exit.

We hiked back to our car and continued onward to New Haven to visit Yale University. Yale was founded in 1701 and is the third oldest university in the country. It is one of the most prestigious universities in the world and was the first institution to award a PhD in the United States. We found roadside parking nearby and wandered around the heart of campus for about 20 minutes.

From New Haven we headed out to Gillette Castle State Park. The castle was once the private residence of William Gillette – an actor and director most famous for his portal of Sherlock Holmes in the late 1890’s and early 1900’s. Entrance into the park is free, but during the months of the summer you can pay to tour inside this medieval looking castle. 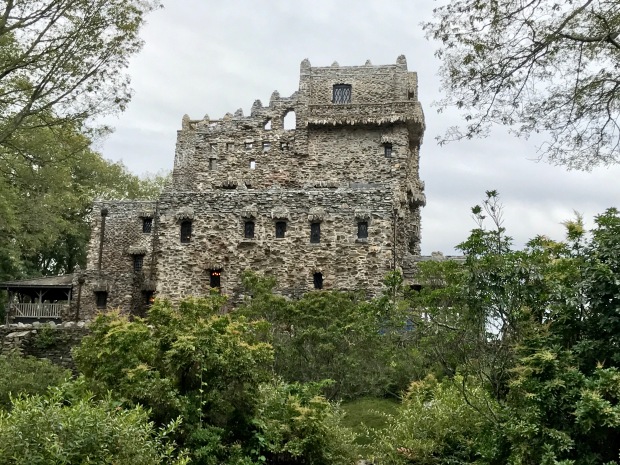 We finished up our self-guided tour inside the castle with 10 minutes to spare prior to closing time. We hiked around the grounds for a bit before heading back to the car. From there we found someplace to eat for dinner before checking into our Airbnb in New London.

The weather was less than ideal for our second day in Connecticut. It sporadically drizzled throughout the morning and early afternoon. But temperatures were pretty mild and at least the rain was pretty light. And if anything the rain probably hindered many of the crowds from visiting the outdoor attractions in Mystic.

We started our day at the Mystic Aquarium. We arrived a few minutes prior to its opening and purchased a combined ticket into the Mystic Aquarium and Mystic Seaport. The aquarium features outdoor exhibits of the Arctic Coast (which showcases two beluga whales), the Pacific Northwest (contains sea lions and Northern fur seals), and a Penguin Pavilion (houses over 35 African penguins). You can also view the Animal Rescue Clinic on the way back to the Main Gallery. The aquarium routinely rescues sick or injured seals with the goal of treating and rehabilitating them in hopes of releasing them back into the ocean. 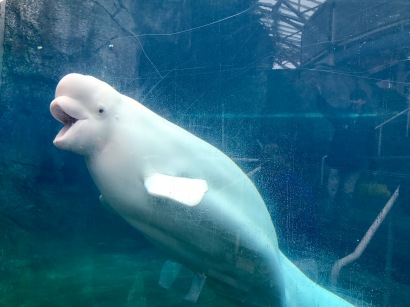 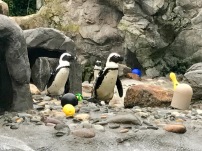 The indoor exhibit in the Main Gallery features seahorses, jellies, rays, sharks, and a variety of other tropical fish and marine animals. 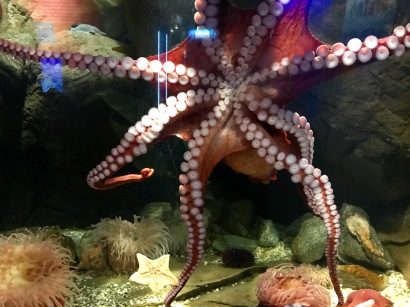 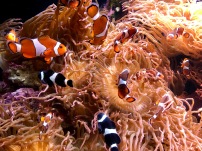 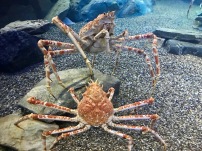 Regular admission into to aquarium also grants entry into the daily Sea Lion show which is offered five times throughout the day during the summer season. The sea lions, with guidance from their trainers, performed a series of behaviours over the course of an hour. It was actually very well done.

After viewing all of the exhibits at the aquarium we returned to our car and ate our packed lunch. We then drove around the corner to the Mystic Seaport which features the largest maritime museum in the United States. The museum contains various sailing ships, vessels, and historic buildings that are arranged to resemble a 19th century seafaring village that spans across 19 acres of land along the waterfront. Collectively there are over 50 buildings, vessels, and exhibits to tour. 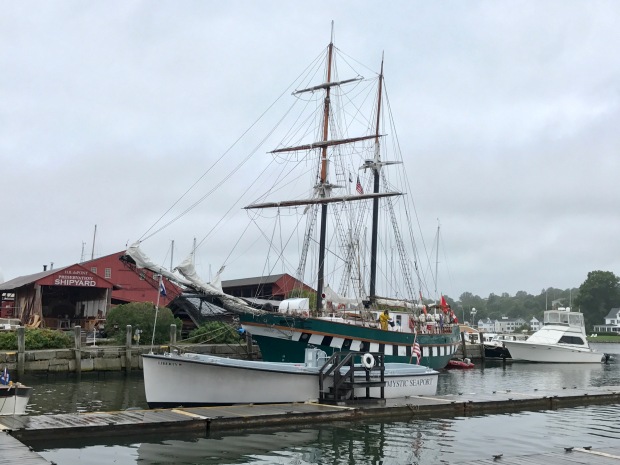 The village itself contains a number of historic buildings, including a shipyard, a boatshop, a store that used to make rope, a shipsmith shop, a shipcarver shop, some churches, a school-house, a convenience store, and a bank.

Among our favorite attractions in the village were the Joseph Conrad and Charles W. Morgan vessels. The Joseph Conrad has been used to train sailors since it was first built in the late 1880s in Denmark. Although there was a period of time where it served as a private yacht and sailed around the world, it has since continued to be used for training purposes in the United States. We happened to stumble onto the boat moments before the scheduled demonstration where the “crew” along with members from the audience (including us) hoisted some pole up that connects to one of the sails (or something like that). The Charles W. Morgan is the last wooden whaling ship used in the United States. It is also the second oldest commercial ship still afloat (the USS Constitution in Boston is older).

After wrapping things up in Mystic Connecticut we headed back home to Boston. We initially planned to camp at a state park in Cape Cod, but the weather conditions worsened (the light drizzle of rain turned torrential) so we decided to cut our losses and return home to sleep in our warm cozy bed.