Located on the northern shores of Lake Superior, Pancake Bay Provincial Park features a pristine sandy beach that spans across 3.2km. It is sheltered from the open lake, shallow, and is reputed to be one of the finest beaches in Ontario. In addition to swimming, Pancake Bay offers a couple of hiking trails that weave through a sand dune ecology and provide panoramic views of the surrounding area.

After spending the last two days at Killarney Provincial Park, we drove 5 hours to get to Pancake Bay Provincial Park, stopping in Sudbury to pick up groceries along the way. We arrived at the park at around 9p.m. The one benefit of camping this early in the season was that it was still light outside by the time we arrived. We picked up our permit, set up our tent, and made a quick dinner before heading to bed.

We had another early start to the day. The great thing about starting early is that it’s still reasonably cool outside and there aren’t many other people on the trails. The bad thing about starting early is that the bugs have a similar idea. We planned to hike along the Edmund Fitzgerald Lookout Trail (14km round trip, rated moderate), which is located across the road from the campground. The trail consists of three routes, so you can scale up or down depending on how much time you went to spend hiking. We initially planned to hike the entire trail.

The first 1.6km of the path was quite gentle and relatively flat. The path reaches the first of two interconnecting loops. We hiked clockwise toward the scenic lookout. There are a series of steps up to two viewing platforms which provides panoramic views of Lake Superior and Pancake Bay. At the viewing platforms there was a couple of interpretive sign explaining the history of the area. From the lookout you can see across to Whitefish Point. This stretch of Lake Superior is known as the “Graveyard of the Great Lakes” where the Edmund Fitzgerald, an American Great Lakes freighter, sunk in a storm in 1975. This ship was the largest on the Great Lakes and remained the largest to have sunk there. 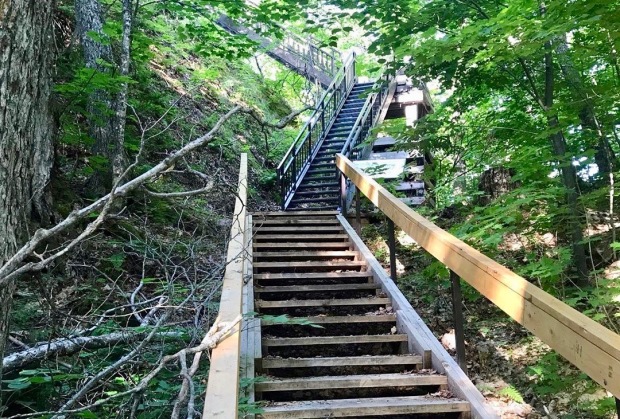 Past the scenic lookout the path becomes progressively more rugged to the point where we were even questioning whether this was an actual trail. The path was narrow and overrun with vegetation. When we reached the point where the trail meets with the second, longer loop, we decided to cut the hike short and just continue along the Falls Trail Loop (10.5km instead of the full 14km).

At some point we took a wrong turn and stopped seeing blue markers. But we did see other footprints and bike tracks through the mud. We reached a certain point where we decided to just keep going because we made it this far and the path couldn’t possibly get worse (spoiler: it gets worse). The “path” we were following was actually some unmaintained “road” (I use this word loosely as it was a muddy mess). The road eventually meets up with the trail and we came across a map of the trail. We decided to hike to Pancake Falls as it was only 580m away. Turned out to be a good call as the path was surprisingly decent. The path back to the trailhead was luxury in comparison to the mud “trail” we were on earlier.

When we made it back to the car we took a small break to eat a snack as there were limited opportunities to take a break on the trail due to all the mosquitoes and mud. We drove back toward the campgrounds and stopped to hike along the Pancake Bay Nature Trail (3.5km, rated easy). The trail begins along the shoreline of Lake Superior before winding through a dense forest along ancient beach ridges. The trail also features a boardwalk and passes through a wetland. There are nine interpretive signs, providing background information on the geology and plant life of the area.

We finished up our hike shortly after noon. We headed back to the campsite to change into our bathing suits and take a swim (more like polar dip) into Lake Superior. The nice thing about our site was that we were next to a boardwalk leading to the sandy beach.

Since shower facilities are closed at provincial parks for the 2020 season due to the pandemic, going for a swim was the only way to wash away all the sweat (tears) and bug spray. After a long morning of hiking, the water sure felt refreshing. 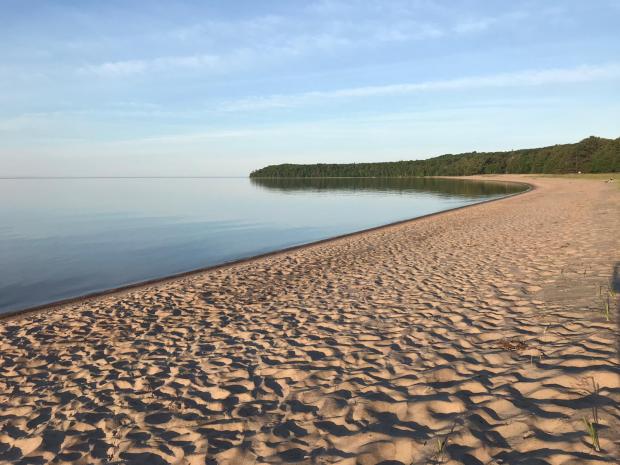 Afterwards we walked back to our campsite to dry off, eat some lunch, take down our tent and pack up our car. We left the park just before 2p.m. From there it’s a 6.5 hour drive to Sleeping Giant Provincial Park.