With its European stye feel and traditional style poutine we were excited to brush up on our français and travel to the largest French speaking province in all of Canada. We visited for four days at the end of November. Sure, the temperature was a little on the chilly side. But the light layer of snow coupled with all the holiday decorations and lights transformed Montreal and Quebec into a magical winter wonderland.

We met up at our hotel in Montreal the night before. I flew from Toronto; K drove from Boston. While our hotel wasn’t exactly located in the heart of Montreal (mostly because we heard driving downtown is a nightmare) we were within a 5 minute walk from the metro.

We started our morning off by heading over to the Biodome. Located in Olympic Park, the Biodome showcases five ecosystems of the Americas. All inside the former cycling stadium used during the 1976 Summer Olympics. The five ecosystems include:

After finishing up at the Biodome, we hopped on the metro to get to Old Montreal. We walked around (in the snow) for a good hour or so before seeking shelter at the nearby Château Ramezay. We forked over our $11 entrance fee for what we thought was a self-guided tour inside the historic home to learn more about its history. Instead the museum just consisted of some collection of paintings, trinkets, and other “historic” objects. Which is all fine as they highlight many of the major artists from Montreal. But after going through the entire museum, we’re still not entirely sure what Château Ramezay’s deal is –  why it was built, who lived there, why it was converted into a museum (or maybe it was just always a museum). 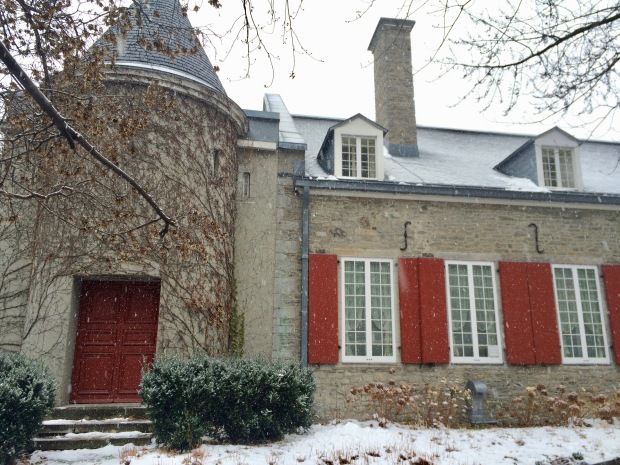 For lunch we wandered over to Montreal’s Poutine for …you probably guessed it… poutine! In retrospect we totally could have shared one. But this allowed us to try two different kinds. 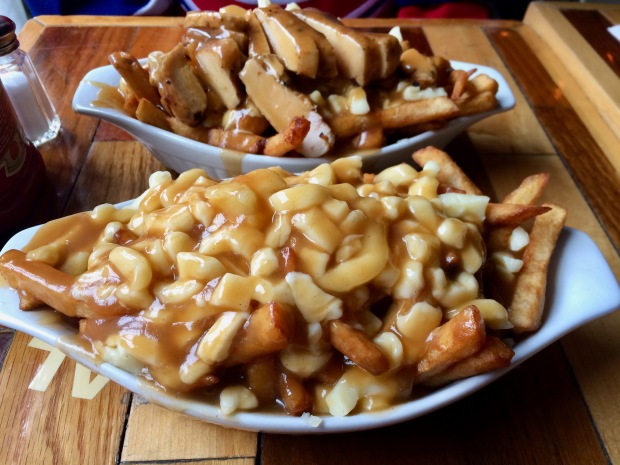 After lunch we walked over to the Notre-Dame Basilica, which is probably one of the most famous churches across Canada. Inspired by Sainte-Chapelle in Paris, its interior underwent a makeover in the late 1800s to transform it into the colourful church we see today. Plus it doesn’t hurt that famous French Canadians like Celione Dion were married here. Or that famous French Canadians like former prime minister Pierre-Elliott Trudeau had their funeral services here. Oh, and there’s also the fact that in 1982 Pope John Paul II raised the status of Notre-Dame from a church to a minor basilica because of its historic relics. So you know the church is kinda a big deal.

While the $5 admission fee includes a 20 minute guided tour outlining  the history of the church we paid an additional $5 to go on the 60 minute Grand Tour of the Notre-Dame Basilica for a more in depth history lesson. As part of our tour we got to explore regions of the church that are normally closed off to the general public, such as the side galleries and organ area.

Afterwards we walked around Old Montreal for a bit more before finding a quiet très adorable place for dinner. We had some time to kill before heading over to the Bell Centre for the hockey game.

Along the way to the Bell Centre we stopped for some snacks to smuggle in with us. But while waiting in line one of the security people informed us that backpacks are no longer permitted inside the arena. Instead we could drop our bag off at some restaurant around the corner that does backpack checks (for $10!). Fine. But this meant we didn’t have a lot of room to hide our candy. And when we went through security for round two, my pack of sweet tarts weren’t so lucky. When faced with the risk of losing my entire pack of sweet tarts entirely, I asked if I could just open up the pack and throw a bunch of them tarts in my mouth. And while I was doing this, the security person turned away from me to continue checking other people’s bags, so I ended up dumping about half the pack of candies into my coat pocket.

The hockey game was pretty good. Probably because Montreal actually has a legit hockey team that wins games and stuff. They played against the Carolina Hurricanes and won 2-1. 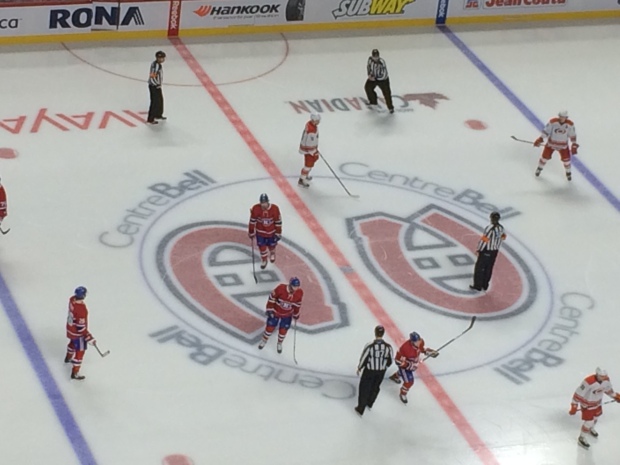 We left Montreal after breakfast and drove about an hour towards Parc Omega. Situated in 2,200 acres of (tamed) forest this park is one part safari, one part zoo, and all parts fun. There is a 15km road that loops through various different environments native to North America – such as the forest, meadow, mountain, lake, and boreal region. All the while featuring an abundance of “wildlife” (I use this term loosely as these animals can probably never be reintroduced back into the wild again). And you can even buy bags of carrots to lure the animals to your car. We bought two.

This park is genius. You have to pay to get in and you can pay more to feed their animals. We actually wish we bought more bags of carrots because we blew through half a bag pretty much as soon as we rolled into the park. A pack of female elk hit the scene within seconds of us putting in our token to get through the gate.

We winded our way through the various loops along the 15km road. We saw elk, deer, wild boars, bison, moose, black wolves, arctic wolves, caribou, arctic foxes, red foxes, and alpine ibex. This park is so much fun that while the website suggests an hour and a half visit is the average time to spend in the park, we were there for just over four and a half hours. Granted, it was easy to loose track of time when we were pretty much the only vehicle within the park. So we felt no pressure to get a move on to share the animals. Oh no, we had them all to ourselves.

From Parc Omega we had a long drive ahead of ourselves to get to Quebec City. We encountered some traffic along the drive and a lot of snow. We didn’t arrive at our accommodations until just after 7p.m. We checked in to our hotel and headed back out for supper. But after sitting in the car all afternoon we thought we’d stretch our legs and wander around in Old Quebec in the snow first.

Our hotel was conveniently located right around the corner from Château Frontenac. Built in 1892 to encourage luxury tourism, this hotel is one of the most famous hotels in Canada and around the world.

From there we wandered down (literally down as there are a million steps leading down to Lower Quebec) to Petit Champlain – a picture perfect European style neighbourhood with cobbled stoned streets lined with shops. It was simply beautiful here with all the snow, lights and holiday decorations. 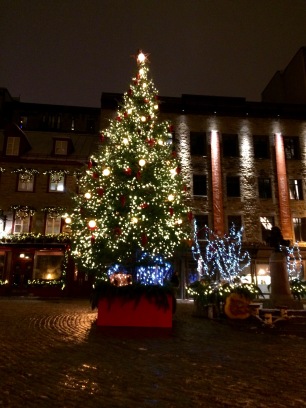 At this point it was getting late. We went into a couple restaurants, but since their kitchens were starting to close, we had no luck. Instead we went back to the hotel and ate some snacks we packed for the trip.

We woke up bright and early and went for a morning stroll around Old Quebec. We winded our way through the cobbled stoned streets in search of a good place for breakfast. We pretty much followed the same path as last night so we could see how it compared in the daylight. This should come as no shocker, but everything still looked so beautiful. But all the snow we got from yesterday was nearly melted. 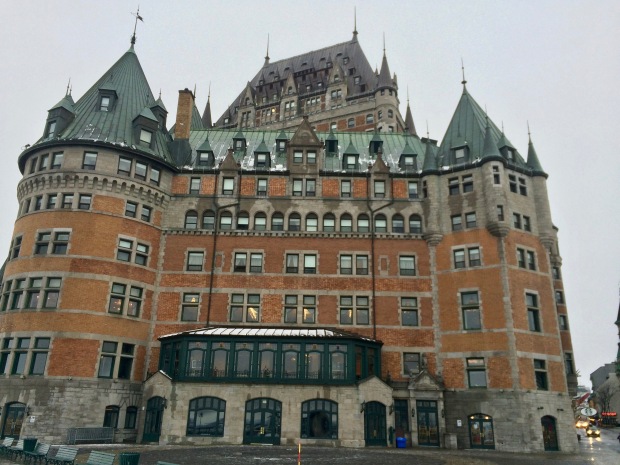 Petit Champlain was worth taking all them steps down to get to for another visit. We leisurely strolled through the (near) empty streets admiring the architecture and all the holiday decorations.

We finally settled in at the Au Petit Coin Breton for some petit déjeuner.

Afterwards we walked back to our hotel to check out. Since we were already in our car we drove down to Montmorency Falls. The park is located just over 10km outside of Old Quebec and is accessible all-year round. We weren’t required to pay an admission fee since many of the park services in November were closed.

There are two main parking areas to view the falls. We first went to the parking lot near the base of the falls where the visitor centre is. But most of this area was closed off for the winter. I think this is where you can take the cable car to the top, but it was not operational when went. Which is fine, because we wouldn’t have taken it up anyway. Instead we drove towards the top of the falls where most of the trails are located. The falls are super commercial and are very tailored to people who don’t necessarily enjoy hiking, but want to be out in nature. There is even a bridge that you can walk along that will take you directly across the falls. 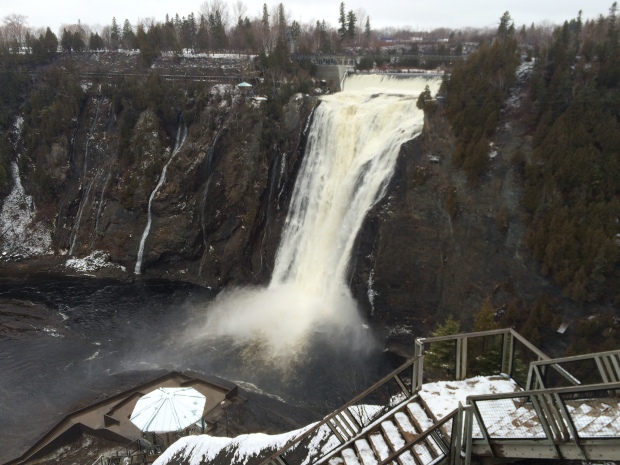 From there we drove back into Old Quebec and checked into our hotel. We piled back out of the car and walked along the Battlefields Park to get to the Citadelle. Located on the highest hill in Quebec City, this star-shaped citadel was constructed to defend the city in case of attack. Although it was never needed to fend off an attack, the Citadelle is still functional and houses the the 22nd Regiment (also known as “The Van Doos” to them English folk who struggled to pronounce twenty two in French), the governor general and Canada’s monarch.

Admission into the Citadelle includes entry into a museum covering much of the history of the Citadelle and 22nd Regiment and a guided tour of the grounds. The museum and tour were exceptionally very well done. Educational and entertaining. 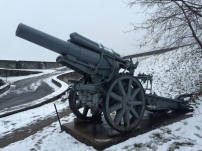 And at the end of the tour our guide took us to the place at the peak of the Citadelle that allegedly offers the best panoramic view of the city.

When we finished up with our tour we walked back to the hotel to warm up before heading back out for dinner. But first we stopped at Chez Astons for a pre-dinner snack. They are reputed to make the best poutine in Quebec. This time we shared.

We woke up extra early this morning so we could go through a final walk around town. Since our hotel was situated right next to Battlefields Park we first went through a stroll along the Plains of Abraham.

After wandering around the cobbled stoned streets of Old Quebec we ended up going back to Au Petit Coin Breton for breakfast since we enjoyed ourselves so much yesterday. And there was no line to get in.

From there we headed back to our hotel to pack up and check out. We wanted to get out on the road at a reasonable time to avoid traffic. It’s a long drive back into Boston.