Boston is considered the birthplace of the American Revolution. Ties between the thirteen American colonies and Great Britain started to unravel in 1765. And Boston was at the forefront of years of protests and acts of rebellion to gain independence. Today visitors can tour many of the historic monuments and sites in downtown Boston and relieve an important piece of American history.

K has been living in Boston for the past couple of months for work. So for the weekend I flew down to visit him and spent some time exploring Massachusetts. The day before we visited Salem to learn more about the infamous Salem witch trials of 1692 and go on a scavenger hunt of some of the locations used in filming of one of my all-time favourite movies ever: Hocus Pocus.

We woke up bright and early and took the metro to Boston Commons. Since the weather was nice, we planned to spend the day along the Freedom Trail, a 4.0km (or 2.5 mile) path that winds through downtown Boston passing by 16 locations that played a significant role in shaping the history of the United States. The historic sites range from monuments, to burying grounds, to a church, and other houses and buildings. Below is a map of the 16 historic locations included on the Freedom Trail:

The trail is clearly marked with a brick path all the way from Boston Commons to the Bunker Hill Monument. 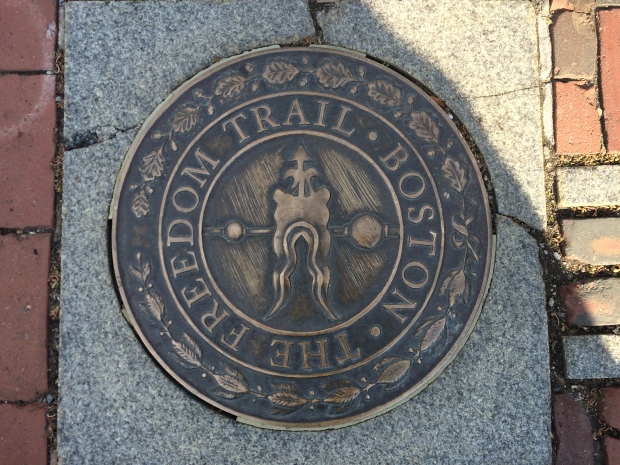 We started at (1) Boston Commons,  which dates back to 1634. This public green space is the oldest city park in the United States. Over the years it has been used for a variety of purposes, including as a pasture for cows, a camp by the British prior to the American Revolution, and a common place to gather (whether peacefully or not).

We then walked to the (2) Massachusetts State House, which still holds the offices of the Governor of Massachusetts. Built in 1798 it is the oldest building on Beacon Hill and the oldest continually running state capital building in the United States. The State House is unfortunately closed on weekends and holidays, so we were unable to go on a tour to learn more about the history and architectural background of it. 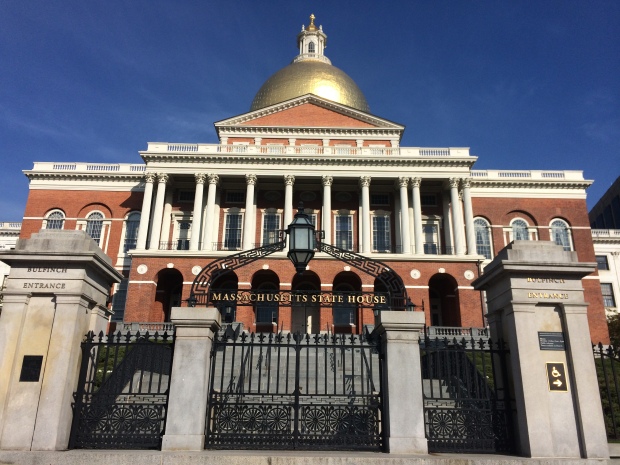 Located around the corner from the State House, is (3) Park Street Church, which held the first Sunday school in the United States back in 1818. Over two hundred years later this church is still up and running.

The (4) Granary Burying Ground is located adjacent to Park Street Church and serves as the final resting place for a number of key patriots – including Paul Revere, three signers of the Declaration of Independence, and five victims of the Boston Massacre.

We walked a few hundred steps before reaching the (5) King’s Chapel and Burying Ground, which is the oldest cemetery in Boston. It is the final resting place for the first Governor of Massachusetts (John Winthrop) and the first woman to step off the Mayflower (Mary Chilton).

Across the street is the (6) Statue of Benjamin Franklin & Boston Latin School – Established in 1635, the Boston Latin School is the first and (therefore) oldest public school in the United States. Among notable people who studied here are five signers of the Declaration of Independence: John Hancock, Samuel Adams, Benjamin Franklin (hence the statue), Robert Treat Paine, and William Hooper.

We then walked to the (7) Old Corner Bookstore, the oldest commercial building in Boston. It was built in 1718 as an apothecary but it wasn’t until the mid 1800s that it became a bookstore. For the early part of the 19th century it also housed one of the most important publishing companies in the United States. Famous authors like Nathaniel Hawthorne and Charles Dickens would often meet here. It has now been converted into a Chipotle. 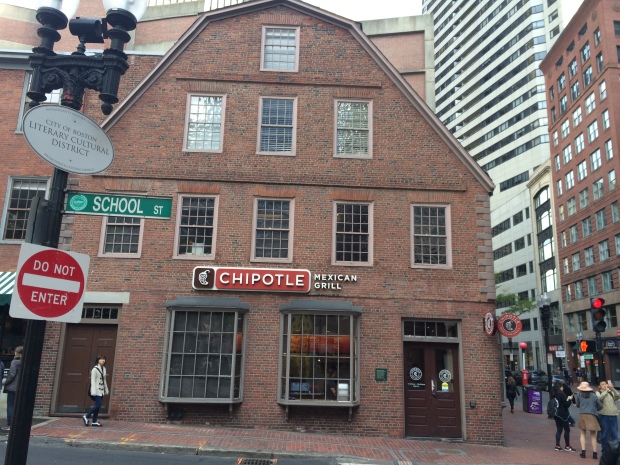 Located across the street is the (8) Old South Meeting House. Built in 1729 this building served (as its name suggests) as a meeting place. It is most famous for holding a debate of British taxation that ultimately led to the Boston Tea Party.

After a brief detour to eat some lunch, we visited the (9) Old State House. Built in 1713 it held the Massachusetts state house up until the late 1700s. In 1776 the Declaration of Independence was proclaimed to the people of Boston from the balcony of the Old state House. From that moment on the Old State House marks the birthplace of the government of the Commonwealth of Massachusetts.

Behind the Old State House is the (10) Site of the Boston Massacre where, on March 5, 1770 British soldiers shot and killed five people. This tragic event is one of the key turning points contributing to the American Revolution to gain independence from Britain.

We walked down the street to (11) Faneuil Hall, which is commonly referred to as “the Cradle of Liberty” since the first town meeting in the United States was held here. Many key patriots, like Samuel Adas, used Faneuil Hall to rally the locals and encouraged discussions surrounding independence from the British.

Next up is (12) Paul Revere House – Paul Revere was an important patriot in the American Revolution. His house is currently a National Historic Landmark as it is the oldest house in downtown Boston. We passed on going inside the house as you had to pay cash.

We then walked to (13) Old North Church, which is the oldest standing church building in Boston. During the midst of the American Revolution it was here where Paul Revere concocted a plan to use lanterns in the church steeple as a signal to the American patriots across the Charles River of the movement of  the British army. “One if by land, and two if by sea”.

Next up is the (14) Copp’s Hill Burying Ground – the second oldest cemetery in Boston dating back to 1659. 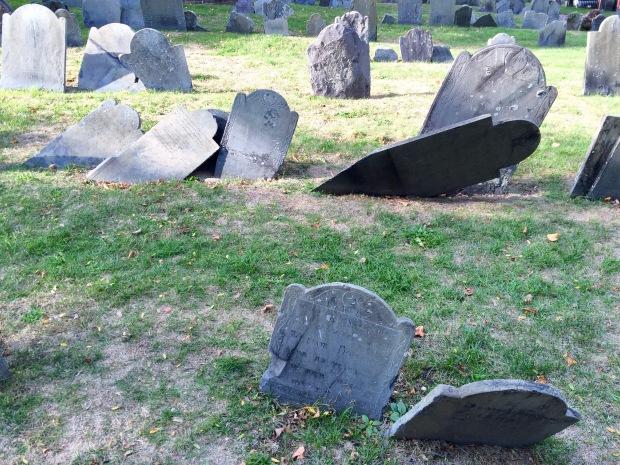 It was a bit of a longer walk to get to (15) USS Constitution. It is the oldest commissioned naval vessel in the US Navy (and in the world). It earned the nickname “Old Ironside” during the War of 1812 for never losing a battle and for having defeated five British warships. The ship is free to visit, but you must pass through a security inspection and show photo ID. 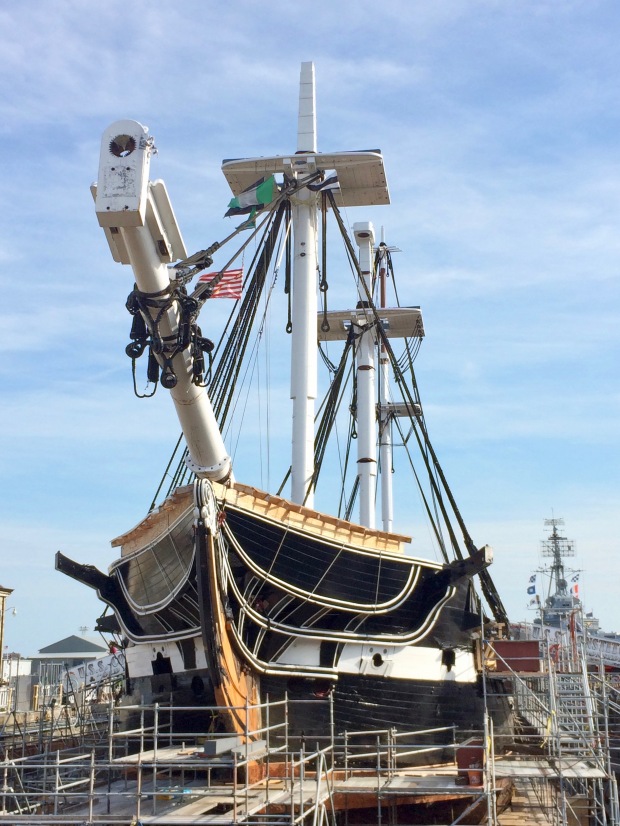 Last up on the trail is (16) Bunker Hill Monument. The monument was built to commemorate the Battle of Bunker Hill, a battle fought between the American patriots and the British. And after walking the entire span of the Freedom Trail you can climb 294 steps of the monument for a panoramic view of the surrounding area.

From here we walked along the Charles River to Cambridge and back to K’s apartment.