Brno is the second largest city in the Czech Republic and is the capital of the state of Moravia. It contains a number of historic sites, monuments, and attractions. As an added bonus, located a bit north of the city lies the Moravian Karst, which encompasses just over a thousand caverns and gorges. There are five caves located in the karst that are open to the public and are easily accessible by car from the city centre of Brno. Given that the train from Budapest to Prague passes through here, it seemed quite fitting to make a detour to Brno for a couple of days.

We got off to a bad start today. We woke up earlier than usual to catch an earlier train into Brno, but due to some confusion at the train station on where to purchase our tickets, we ended up missing our train. And then we had to wait around for two hours for the next train to arrive. Due to some miscommunication with the lady at the ticket counter, we ended up purchasing tickets for first class. Sure, they were much more expensive than second class, but it was actually quite lovely and we were on the train for four hours, so no big deal.

We arrived in Brno in the early afternoon. The whole city centre is quite walkable and most attractions are within less than 15 minutes walking distance from the downtown core. We headed over to our Airbnb, collected the keys from our host, dropped off our bags, and set back out to explore the city. After sitting on a train (and at the train station) for the entire morning, we were eager to stretch our legs.

We started off at the Brno ossuary. With over 50,000 people buried here underneath the Church of St James, it marks the second largest ossuary in Europe (only the catacombs in Paris is larger). This ossuary was established in the 13 century as the city walls prevented the extension of the churchyard and older remains from the churchyard were moved here. Due to frequent plague and cholera epidemics, the ossuary quickly reached capacity. It was closed in the late 1700s because it was deemed unhygienic and was largely forgotten about. The ossuary was only rediscovered in 2001 and opened to the public in 2012. The museum showcases a variety of human skulls and bones arranged along the walls across three main chambers. 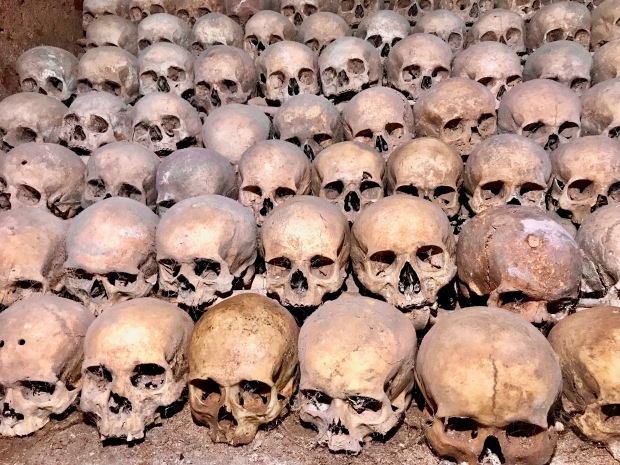 Located a few blocks around the corner is the Mint Master’s Cellar, which features a system of cellars that illustrates the history of coin minting in Brno in Moravia. The tour is self-guided, but you are first required to watch a series of films (or infomercials) about Brno and its historical attractions. Afterwards you are free to explore the exhibits through the connected cellars.

From there we walked up Petrov hill to the Cathedral of Saints Peter and Paul. The  bells in the cathedral tower ring at 11 a.m instead of at noon in remembrance of trick some citizens played on the invading Swedes during the Thirty Years’ War. According to the legend, the Swedes had promised that they would call off their attack if they failed to conquer the city before the bells started ringing at noon on August 15th. With the battle underway, some citizens in Brno decided to ring the bell one hour earlier. The church was still seriously damaged during this war though.

We paid a few Koruna to climb the steps up into the tower. We were the only people up in the tower when we visited, which was probably a good thing as the space is quite tight. Up at the top there are a pair of doors located on opposite sides of the tower with a very small viewing platform that could only accommodate a handful of people. Regardless of their size, the platforms provided panoramic views of the city below.

Afterwards we went to the Brno airport to pick up a rental car for tomorrow. We planned to visit some of the caves in the area and the easiest way to do that is by car. There was some confusion at the train station as to where we catch the shuttle bus (this seems to be a common theme on our trip so far), but we eventually got to where we needed to be. We picked up our car, drove back to our accommodations, and then headed up to Špilberk Castle.

Since Špilberk Castle was established in the mid 13th century, it has been used as a royal castle, seat of the Moravian margraves, baroque fortress, the hardest prison in the Austro-Hungarian empire, and then into barracks. The castle does house a series of exhibits around the history of the construction of the castle and its time as a prison, but by the time we got around to visiting, it was well after closing. We walked along the grounds for about an hour or so before heading back for the remainder of the evening. We picked up some food to make for dinner along the way. 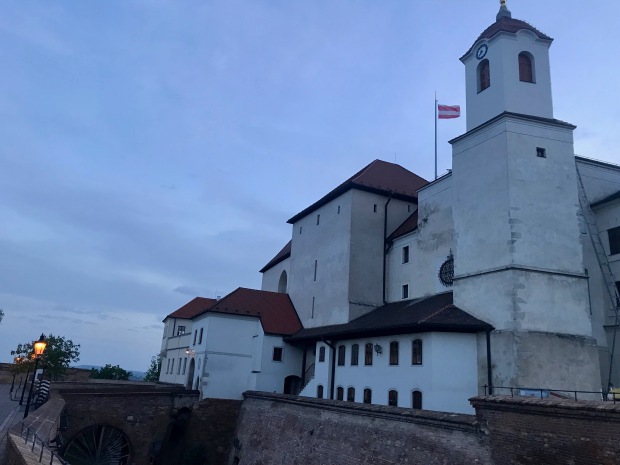 Located roughly 40km north of Brno likes the Moravian Karst – a protected nature reserve that is rich in limestone and consists of a series of over a thousand caves, caverns, gorges, and underground streams. There are five caves scattered just outside the town to Blaskso that offer guided tours to the public.

We started our cave adventure off at the Punkva Caves, which is part of a large cave system that was created by an underground stream. This is the only cave that requires a reservation in advance and consists of two parts: a dry part and water part. The Punkva River flows through part of this cave so the “water” portion of the tour involves hopping on a boat to explore the underground passageways.

We parked our car at the parking lot closest to the Macocha Abyss, a large sinkhole that is just under 140m deep and is part of the Punkva Caves. We were also required to pay for a parking pass. And turns out that this parking pass is only valid for this particular parking lot. The entrance to the Punkva Caves is about 2km from the parking lot. You can either hike down to the cave (which is what we did) or take a cable car down for an additional fee. Once we got there, we checked in to get our tickets. There was an additional charge for taking pictures, which we paid. This photography charge is quite common in the Czech Republic and is not well enforced. Most of the people who accompanied us on the tour didn’t pay this extra fee (you’ll get a special sticker to put on your camera or phone) and still took pictures throughout.

The cave tour is an hour in duration. The first half of the tour through the dry portion of the cave was pretty nice and featured a variety of neat speleothems: stalactites (which hang from the ceiling), stalagmites (which grow from the ground up), columns (when a stalactite meets a stalagmite), and flowstone (wavy sheets of calcite hanging downward). The tour is divided into a series of rooms, and once we entered each room, our guide played a pre-recorded message highlighting a bit about the history of the cave as well as the neat cave formations to look out for. 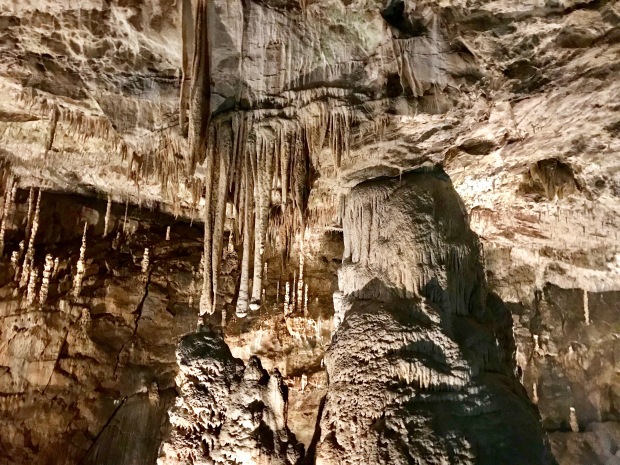 At the end of the dry portion of the tour, the path leads to the bottom of the Maccoha Abyss. From here the remainder of the tour is by boat to explore the underground caves on the Punkva River. Our group was split into smaller groups at this point.

We made one detour along the way that required scrambling out of the boat for a few minutes to see a really nice cave formation. 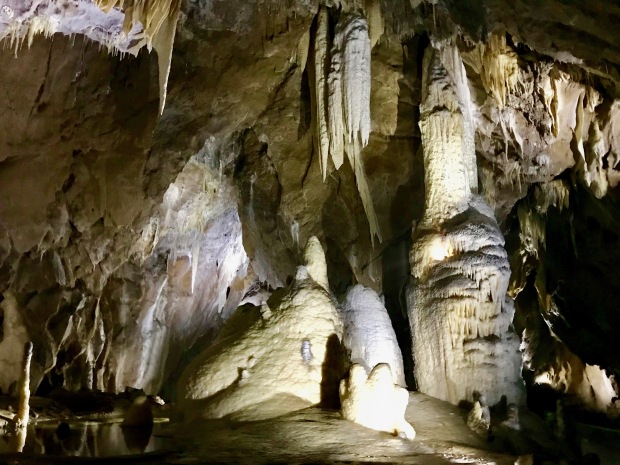 Let’s just say that in the interest of time, we decided to take the cable car back up to the parking lot (it would have been a fairly steep hike and it was hot outside). From there we drove to the Balcarka Cave, which is known for its beautiful dripstone formations. The cave tour is an hour in duration and runs every hour on the hour. We were the only people on the tour and our guide didn’t speak any English. But similar to the last cave, there is a pre-recorded audio track in English that our guide played in each of the key areas in the cave that provided more detail as to what to look for. This cave probably had the most elaborate cave formations out of all three caves that we toured. And we didn’t have to pay for parking.

We finished up around lunch o’clock so we found a nearby grocery store to make some sandwiches. We then went to Catherine’s Cave for our third and final cave tour of the day. This was the shortest tour of the three caves we visited and lasted 40 minutes. We were also required to pay for parking again. The cave contains the biggest underground hall in the entire Moravian Karst cave system. For this reason concerts have been known to take place here. The cave also features a series of stalagmites that is referred to as the Bamboo Forest.

We finished up in the mid-afternoon and drove back to the airport to return the car. We hopped on the shuttle to get to the main bus terminal in Brno. From there we caught a train to Prague.