Don’t be fooled by the relatively short distance of this section of the Bruce Trail. The path meanders along several ski hills that involve a lot of highs and lows (literal and figurative). As a reward for your efforts, the trail provides sweeping views of the rolling countryside and the Nottawasaga Bay.

All maps and kilometer references are based on the 27th edition of the Bruce Trail Maps and Trail Guide.

We haven’t had much snow this year. So after a snowstorm on Saturday, the only thing to do was to play outside in it. Or rather, snowshoe outside in it. We drove all the way up to Nottawasaga Bluffs Conservation Area, which spans across 400-acres and offers a number of different trails through hardwood and coniferous forests, open meadows, and  along small crevices in cliffs.

We parked at the small parking lot located at the northern entrance of the conservation area. There was a sign indicating that daily parking was $6.50 a day, but the actual machine to purchase the parking ticket was buried underneath a snow bank.

We hiked along a loop, starting first along the Bruce Trail before taking the Betty Carter Side Trail (800m). It was an interesting snowshoeing adventure as the weight of the snow and ice on the trees made for some interesting maneuvering over, under and through tree branches. 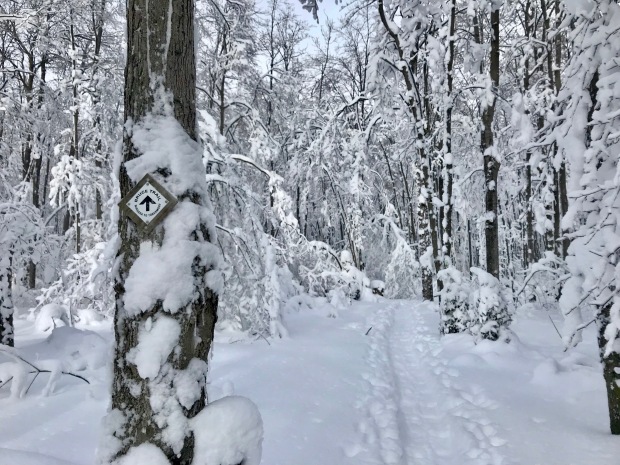 It was sometimes unclear where the path continued as many of the blazes were covered in snow. We were also forging a new path for part of the trail so we couldn’t even rely on footprints from other hikers or snowshoers. Either way, it was a lot of fun trailblazing through all the snow.

The Betty Carter Side Trail intersects with the Bruce Trail again. We followed this for a couple of kilometres before reaching the Keyhole Side Trail (740m). This side trail was easily one of the highlights from our hike and is well worth the detour. The path leads through a pass between large rock boulders and features a tight squeeze through a hole in the wall. This was a bit interesting to get through with our snowshoes, but we managed without having to take them off.

The Keyhole Side Trail leads back up with the Bruce Trail, which we followed for another few kilometres before looping back to the parking lot.

Things have been a bit chaotic here with the COVID-19 pandemic. Since we would both be cooped up indoors working from home over the next three weeks, we decided to go for a hike. And because there hasn’t been much traffic on the road, we decided to drive further north to the Noisy River Provincial Park, which marks the start of the Blue Mountains section of the Bruce Trail.

We parked on Mulmur-Nottawasaga Townline in front of the cemetery. The first portion of the path is along the road, which eventually leads to the forest. There was a thick layer of snow on the ground, which was a bit surprising considering there is none in Toronto. This made for an interesting challenge on certain sections of the path, but overall, it was quite a pleasant hike. And the weather was fabulous.

The trail weaves through the forest and features cliffs, crevice caves and wetlands.

We turned around when the path meets the road and hiked back the way we came.

It’s been an unseasonably cold spring this year. Despite the fact that the forecast was calling for wet snow, we decided to go for a hike anyway. Besides, the one benefit to crappy weather (and the pandemic) is that there generally are fewer cars out on the road.

We parked just north of the Noisy River Provincial Park and planned to cover a road section due to the crappy weather. We figured the trail would be wet and muddy. Turns out the Bruce Trail revised this particular section by creating a detour through a few fields and the Dunedin Ravine Nature Reserve, thereby closing off the road section. This is one of the downsides to using an outdated map book (from 2017). This was also not ideal as I wore running shoes instead of my waterproof hiking boots. Needless to say my soaks were soaked by the time we returned to the car.

It pretty much snowed throughout our entire hike. We were still pretty surprised to see snow this time of year, but the plus side is that I’m pretty sure it deterred others from hiking as we had this section of the trail all to ourselves. 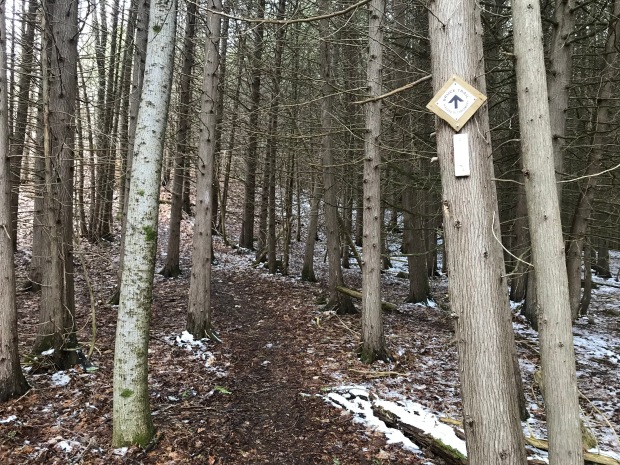 We turned around at the June & George Willis Side Trail and followed the road back to the car.

We’ve been under lockdown for the past couple of months, and as of this week, provincial parks in Ontario are back on the menu. What better way to spend the weekend than hiking. Especially since the weather was (finally) pleasant.

We hiked through the Pretty River Valley Provincial Park, which contains geological features related to glacial and post-glacial processes, such as meltwater channels, moraine and talus slopes, along one of the highest points of the Niagara Escarpment. We parked along the Pretty River Road and took the Pretty River Access Trail to get to the Bruce Trail. The trail winds through a dense cedar grove before heading down the valley to cross the Pretty River. 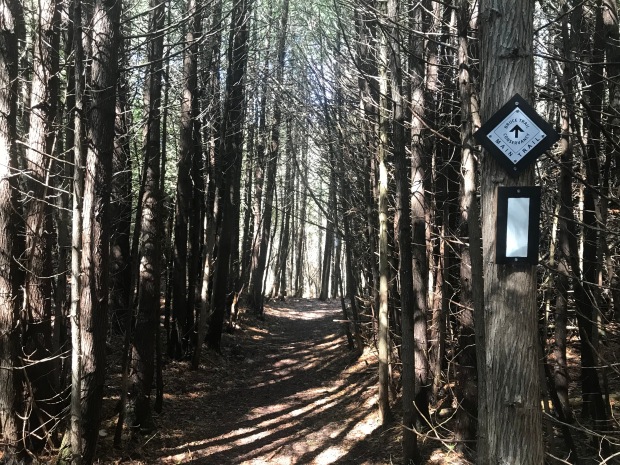 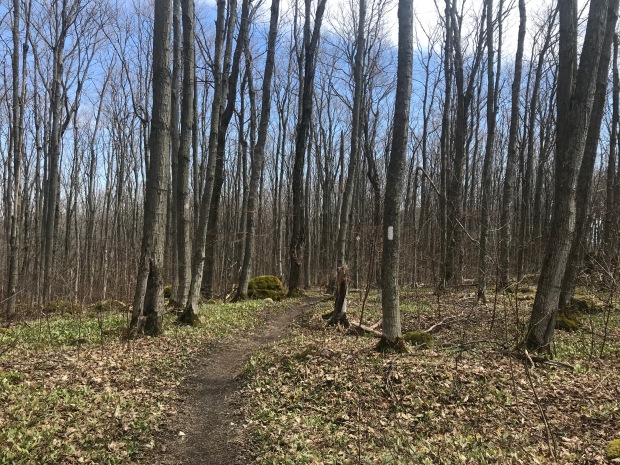 Since we still had some energy left in us (and it really was a beautiful day outside), we drove a bit south to finish up a small portion we had left to hike through the Noisy River Provincial Park. Despite its short distance, the path was essentially a kilometre downhill and then back uphill to return to our car. 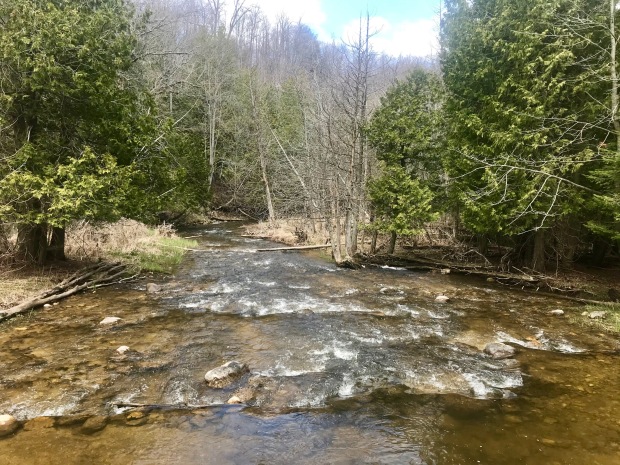 Nestled high up on the Niagara Escarpment near Collingwood, the Nottawasga Lookout Provincial Nature Reserve features some great hiking trails along a cliff, forested slopes and through caves and crevices. There are also a number of great viewpoints overlooking Georgian Bay along the way.

We parked along the side of the road near the southern edge of the nature reserve. The first stretch of the path was relatively flat and followed along the edge of the Escarpment through a dense forest. We turned around at the western edge of the nature reserve when the path crosses the road. The trail itself was pleasant enough, but the real highlight of the Nottawasga Lookout Provincial Nature Reserve is the Standing Rock & Caves Side Trail (630m).

The side trail heads down the Escarpment to a standing rock pillar and leads through, under, around, and above large boulders, cervices and small caves. Despite the fact that it was June, there was even a layer of thick snow and ice at the bottom of the valley. This made for some interesting maneuvering through some of the narrow wedges between the rocks.

We felt a sense of accomplishment when we made it back to the top of the Escarpment. We followed the white blazes along the Bruce Trail for a couple hundred metres to get to the Singhampton Side Trail (190m), which provided a nice short-cut back to to where we parked the car.

Return here for more of our Bruce Trail adventures.