I usually celebrate my birthday by going away on vacation. Obviously we couldn’t do that this year due to the pandemic (who would have thought?). Instead we went back to the cabin. The timing worked out well as the forecast was calling for fabulous weather. We also figured we might as well spend as much time here as we can before the bugs take over for the spring.

We arrived at the cabin Friday evening at around 10:30p.m. We didn’t bother staying up to light a fire as it wasn’t very cold outside (it was -5°C inside the cabin). Besides, it’s not as if we were going to get up in the middle of the night to continue feeding the fire anyway, so why bother?

After eating some breakfast, we went for a walk up the road, leading to a few other cottages on our side of the lake. Shortly after we started our walk, we encountered a beaver in the middle of the path. At first I thought it was a porcupine (or a very large wet rat) until I saw it’s tail. It made these weird hissing noises, so we thought it best to just back away slowly and go down a different path leading up to the main road.

From the main road, we turned off at a side road leading to a few other cottages nearby. We were not that surprised to see that other people were visiting their cottages as well. We turned around at the end of the road and walked back the way we came. 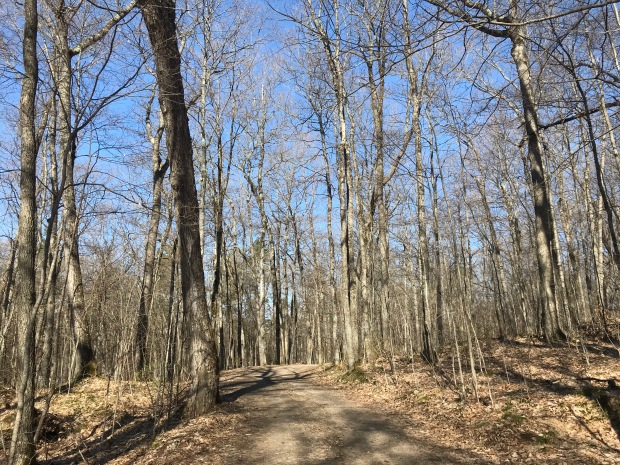 Shortly after we finished our walk, K’s dad and younger sister arrived. When they heard we were coming to the cabin for the weekend, they decided to make the drive down for the day to spend some time with us. It was also a good excuse to cut down more firewood with extra pairs of hands around to help lug the wood up to the cabin and outhouse.

After chopping up more wood, we went inside to make lunch. We then went back out to walk to the old mining buildings in the area. From 1903 to 1907, the Star of the East mine was located in this area. The mine was never successful and many of the buildings were torn down, but the foundations from those buildings can still be found. We first went to the old Administrative building and Bunk house. 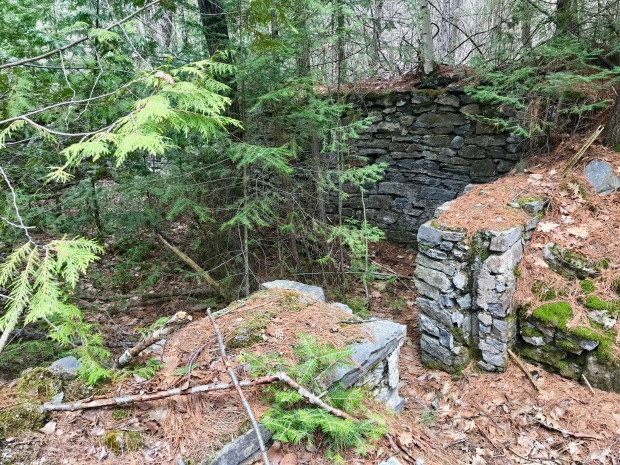 K’s dad then showed us the path of where to go to see the building that used to store the dynamite. Unlike the other old mining buildings, this one was never torn down. And for being over a hundred years, the building was in pretty decent shape.

We then went to the old mine shaft. It was filled in and there wasn’t a whole lot to see. But it was still interesting to know where the entrance to the mine was. On the way back to the cabin, we made a short detour to the Crusher. This is where the rocks from the mine were brought to be  crushed down, making it easier to extract the gold. 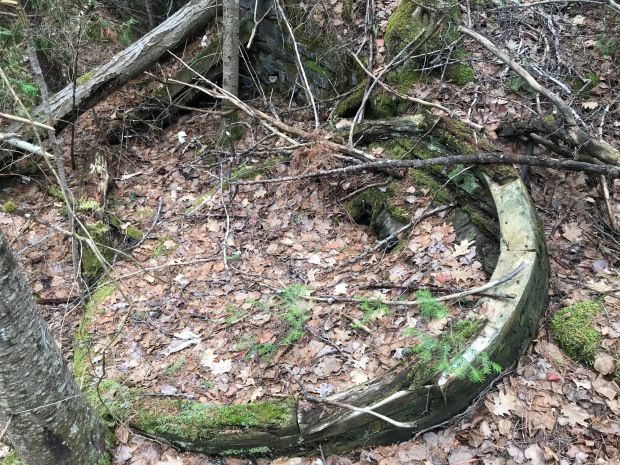 After our hike we returned to the cabin to rest and relax. K’s dad and sister left at about 5p.m. Shortly after they left, it started sprinkling. K went back out to cut the remainder of the firewood and I ran to the car to get our “burn bag” (i.e. the stuff that we would usually shred if we had a shredder, but don’t, so we save it up during the year and take it with us whenever we go camping or to the cabin to burn).

It continued to rain throughout the evening. After eating some dinner we curled up by the front window and read.

Day 2: Just Around the River Bend

During this time of year, the winds usually pick up later in the morning, making it challenging to be out on the water. So after eating breakfast, we took advantage of the warm weather and calm water and canoed around the bay.

This lake connects to a much larger lake, but this time of year, the current is quite strong to paddle into. Instead we canoed along the shoreline. We also made a detour to a very small island located near the cabin.

We paddled back when the wind started to pick up. We then leisurely took our time packing and cleaning up. After eating a late lunch, we went for a walk before heading back to Toronto.

We usually don’t visit the cabin in the spring as the bugs are out of control. We were lucky with this visit as the bugs weren’t bad and the weather was pleasant. This will probably be our last visit for the next few months until later in the summer.