Acadia National Park is one of our favourite parks in North America. Located on Mount Desert Island along the Atlantic coast in Maine, it encompasses all of the beauty, charm, and ruggedness of New England’s wilderness. Many of the trails weave their way up, down, and around mountains, through lush forests and along a granite coastline, all the while providing sweeping views overlooking the lively Atlantic Ocean.

There are a variety of different types of hikes in the park: coastal trails that lead to the rocky shoreline, summit trails that wind their way up a mountain and provide sweeping views of the area, and iron rung routes that consist of a series of iron rungs and footholds to assist scrambling up and around large boulders. Below is a list of our favourite hikes:

1. Precipice Trail (3.2 miles roundtrip) is reputed to be an extremely strenuous hike that involves scrambling over rocks, using handrails and footholds to shimmy across steep ledges, and climbing up a series of iron rungs and ladders – sometimes along exposed sections of a cliff. The Precipice Trail is nearly a 1.5km vertical ascent up Mount Champlain, the 6th highest peak in Acadia. The trail is usually closed between mid March to mid August for peregrine falcon nesting there is a small window to hike this trail with reasonably good weather. To descend there are two options: you can take the Champlain South Ridge Trail to the Bowl Trail to Park Loop Road (longer route) or the Champlain North Ridge Trail to the Orange and Black Path to the Park Loop Road (shorter route). We read in advance that both trails are rather uneventful, so we opted for the shorter path. 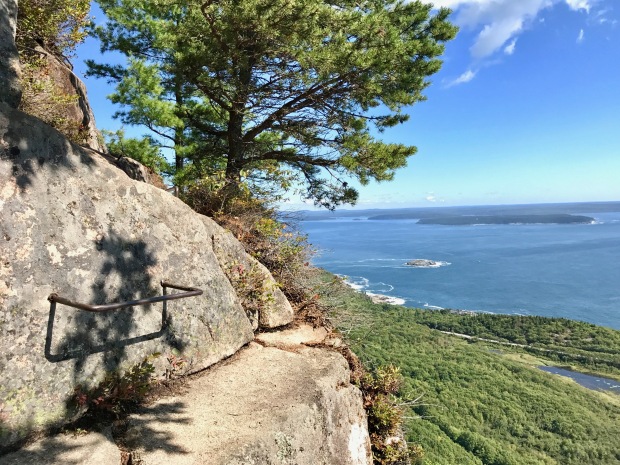 2. Beehive Trail (3.2miles roundtrip) also involves a lot of rock scrambles and iron rungs to climb upwards. The trail starts off at the Bowl Trail across the road from the parking lot for Sand Beach. The first little stretch involves hopping around smaller stones (a warm-up for what was to come) until you reach a signpost for Beehive Trail. After this point there are iron rungs and iron handrails to help you scramble up and around large boulders, all the while hiking close to the edge of the cliff. The ascent provides great views overlooking Sand Beach. Once you reach the summit marker you can continue onwards to the Bowl, a glacially carved pond, which eventually loops back to the trailhead. 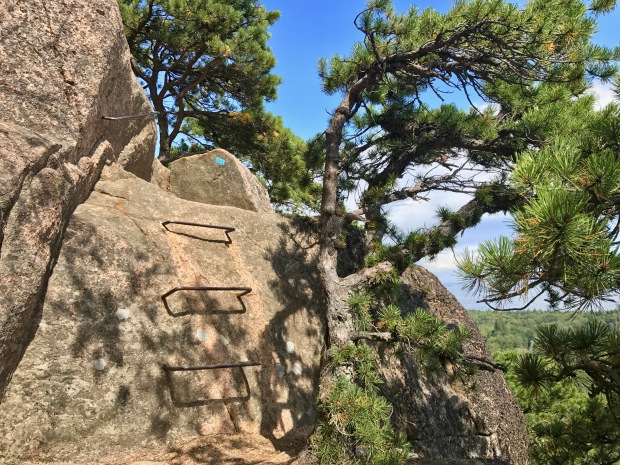 3. South Bubble Mountain (1 mile roundtrip) is a short hike, predominantly uphill, which features commanding views of Jordan’s Pond and Eagle Pond. Located a few hundred metres from the summit marker is Bubble Rock, a large boulder that was deposited precariously close to the edge of the mountain when the glaciers retreated during the last ice age.

4. Jordan Pond Path (3.3 miles roundtrip) is relatively flat and hugs close to the shoreline of (as its name suggests) Jordan’s Pond. The terrain consists mostly of gravel on one side and a series of boardwalks on the other. The trail features nice views of the South and North Bubbles.

5. Penobscot Mountain (3.7 miles roundtrip) starts at the Jordan Pond North parking lot.  Turn left at the boat launch and follow the Jordan Pond Path until it intersects with the carriage road. Follow the carriage road south for a few minutes and turn off at the Spring Trail trailhead marker. The Spring Trail gently winds through a forest of cedars and pines and meets back up with another carriage road at the end. Once crossing the road, the trail up Penobscot Mountain begins. Up is the key word. With an elevation gain of 940ft, this hike is no joke. The trail follows a series of stone steps and large boulders up the edge of the cliff face. There are a few iron rungs and wooden handrails for extra guidance. Once you scramble up the cliffs, the trail levels off and gradually ascends up and over granite stones towards the summit marker.

Just beyond the summit marker the trail splits off into two paths. There’s an option to extend your hike (and your legs some more) and summit up Sargent Mountain, the second highest peak in Acadia. Or you can start the descent back down along Deer Brook Trail. We opted for the latter The path itself wasn’t too bad, in large part because it runs parallel to a small creek. The trail intersects with the carriage road, which you can continue onwards to get back to the parking lot. Or you can cut across it and continue following along Deer Brook Trail to Jordans Pond for a more scenic hike, which is what we did. Shortly after crossing the carriage road, we were rewarded with great views of the Deer Brook Bridge. The Deer Brook Trail ends near the mid-way point around the Jordans Pond Path. We followed the trail south along the western part of the shoreline. 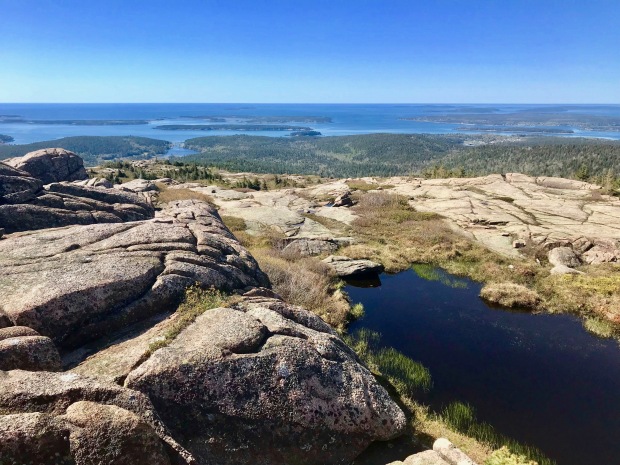 The Acadia Mountain Trail is much more lively. We approached the summit from the east and hiked this counter clockwise as it’s more fun to attempt the rock scramble going up versus coming down (but let’s be real, it’s fun both ways). The views from the summit marker are breathtaking and offer panoramic views overlooking the Atlantic Ocean.

7. Pemetic Mountain (~4 miles roundtrip) provides sweeping views overlooking the ocean and surrounding area. There are four trails that weave their way up to the summit. We opted for the Pemetic South Ridge Trail as it was rated the family-friendly route to reach the summit. The trail starts at the Jordan Pond North parking lot. The first little stretch involves hiking east along the Jordan Pond Path until reaching the junction with the Bubble & Jordan Ponds Path. We followed the path until we reached the signpost for the Pemetic South Ridge Trail. From here the trail becomes noticeably more strenuous and involves maneuvering around roots and rocks until you get above the tree line. Then it’s a matter of ascending up large granite slabs until you reach the summit marker. From the summit, there are a few options to descend. We opted for a longer loop that descends down the Pemetic North Ridge and follows the carriage roads back to Jordan Pond

8. Gorham Mountain (2 miles roundtrip) certainly isn’t one of the tallest peaks in Acadia, but it does provide fantastic views overlooking the ocean without having to commit to a strenuous or lengthy hike. A few hundred metres into the trail the path branches off into two directions – the Gorham Mountain Trail continues to the left and the Cadillac Cliffs Trail to the right. Both paths reconnect and lead up the mountain. The Cadillac Cliff Trail is slightly more challenging and involves scrambling up some large boulders. It provides lovely views of the exposed cliff composed of large granite slabs. There are even a few iron rungs along this section to help scramble up some of the particularly larger rocks. Once the two paths reconnect, it’s a relatively short push to reach the summit marker. On our return journey back to the car we continued along the Gorham Mountain Trail. The part of the path that runs parallel to Cadillac Cliffs Trail was much smoother and gentler.

9. North Bubble and Conners Nubble (3.4 miles roundtrip) provide great views overlooking Eagle Lake. The summit of North Bubble is around the same elevation of South Bubble, so it wasn’t particularly strenuous. It did involve some minor scrambling to get up and around large granite slabs. The summit provided excellent views above and around Eagle Lake. We continued on our journey to get to Conners Nubble. From here it was a slow descent down the mountain to Eagle Lake Trail. This was probably the most challenging stretch of the hike since it was downhill and involved careful consideration stepping over rocks. We followed the path to Jordan Pond Carry and looped back to the Bubble Divide Trailhead. We followed this to get back to the car park.

10. Ship Harbour (1.3 miles roundtrip) forms a figure eight loop and weaves through a forest to the ocean shoreline. This area is reputed to be great for tide pooling as many shallow pools of water are formed during low tide around the rocks.

There are also a variety of other attractions that require minimal walking to view. These include:

For all three visits, we stayed in the Blackwoods Campground due to its close approximation to Bar Harbour and many of the popular trails. There are two loops in the campground: loop A and loop B. The sites in loop B are reputed to be more private and spacious. So naturally loop B is where we set up shop for each visit.