Budapest: the tale of three cities named Buda, Pest, and Óbuda. Buda is quite hilly, lies on the western bank of the Danube, and features many of Budapest’s medieval structures and monuments, including Castle Hill and Buda Castle. Pest is predominantly flat, consists of the eastern part of the city across the river, and features attractions such as the Hungarian Parliament Building and Heroes’ Square. Óbuda lies north of Buda and isn’t really home to any of the popular tourist attractions, so it’s often forgotten about. Together these three cities united in 1873 to form Budapest, which is now the capital of Hungary.

Day 1: Views along the Danube

We took an early trail from Bratislava to Budapest and arrived at our Airbnb just after noon. We dropped off our bags and set off along the Danube to explore the city on a beautiful spring day. The sun was shining and there wasn’t a single cloud in the sky, so we decided to start our day off hiking up Gellért Hill, which offers panoramic views of the city overlooking the Danube. The hill was named after Saint Gerard who was put in a barrel and rolled down from the top of the hill to his death during the pagan uprising in 1046.

There are a number of monuments and statues scattered around the hill, including one of Saint Gerard overlooking Elizabeth Bridge as well as Budapest’s Statue of Liberty which stands on top of the hill. The Citadella is situated on the highest point of the hill  and served as a fortress during the Hungarian revolution and war of independence from 1849 to 1867.

Located near the base of the hill is the Gellért Hill Cave Church, which was built inside the rock and connected to a network of other caves under the hill. It served as a chapel and a field hospital during World War II. We unfortunately weren’t able to go inside as it is closed on Sundays.

Afterwards we walked to the Hungarian National Museum, which features seven permanent exhibits featuring many items relating to the general history, art and archaeology of Hungary. The museum contains a variety of relics and objects, including stone inscriptions and carvings, glass, ceramics, textiles, paintings, musical instruments (one of which was Beethoven’s grand piano), weapons and furniture.

Afterwards we headed back to our accommodations for a break before finding a nice quiet spot on the cobbled streets for a place to eat dinner.

This morning we woke up bright and early to get to the Fisherman’s Bastion before the crowds rolled in. The Fisherman’s Bastion is situated on the western side of the Danube in the Buda part of Budapest and offers excellent views of the surrounding area. It was built just over 100 years ago to commemorate the fisherman who protected this side of the Buda side of the castle wall the Middle Ages. There are seven towers located on the bastion that symbolize the seven Hungarian tribes that arrived to the Carpathian Basin in 895. The lower levels of the Fisherman’s Bastion are open to the public, however, you can also pay a(n unnecessary) fee to enter the lookout at the top-level.

Matthias Church is located directly behind the Fisherman’s Bastion and is one of the largest churches in Budapest. Given that we were visiting over the Easter long weekend, the church wasn’t open to the public until the afternoon, so we decided that we’d return here tomorrow.

Since the weather was so nice, we decided to continue walking down along the Danube to Margaret Island. The island itself is situated in the middle of the river and is 2.5km long and consists mostly of landscape parks. It features a number of gardens, including a rose garden (although we were a bit too early in the season to see any roses) and a Japanese garden as well as some medieval ruins from the Middle Ages. It is quite popular among tourists and locals alike for recreational and sporting activities.

The other advantage of visiting Margaret Island is that it provides fantastic views of the Hungarian Parliament Building. It is situated along the Southern side of the Danube and is the tallest building in Budapest and largest building in Hungary. 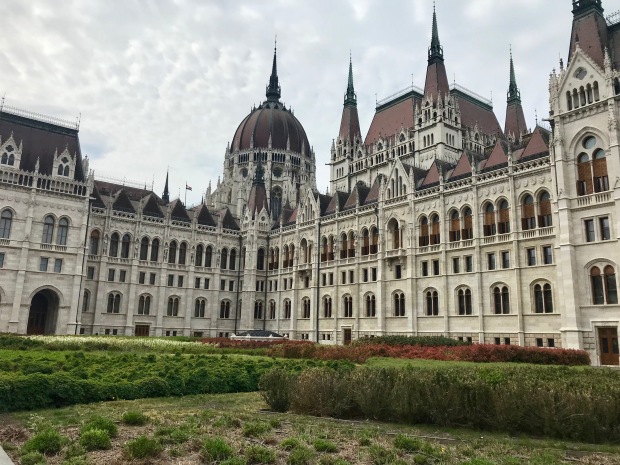 Also located on the southern side of the river are the Shoes on the Danube Bank, which serves as a memorial to honour the Jews who were killed by Arrow Cross militiamen, a far-right fascist party in Budapest, during World War II. The Jews were lined up, ordered to remove their shoes at the edge of the river (since they were valuable belongings at the time) and shot. 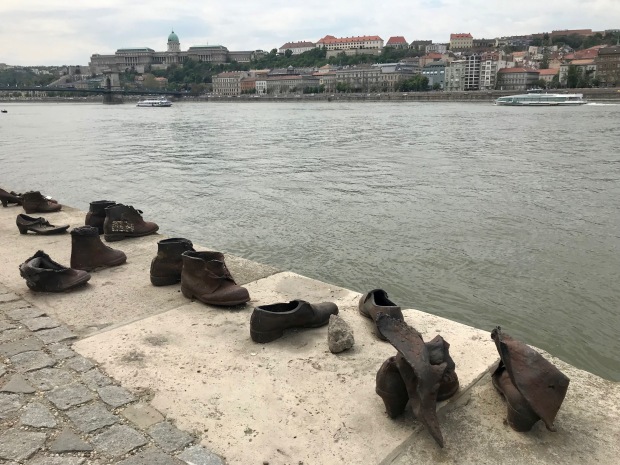 Afterwards we walked back to our accommodations to rest our tired legs, picking up lunch along the way. We headed back out in the late afternoon and strolled along the Buda Castle District. We then made our way over to the Faust Wine Cellar to sample some wine from the Hungarian region. The tasting itself takes place in an actual cellar, which is quite cozy and dimly lit. We made reservations in advance for a tasting of six wines, which actually consisted of trying five wines and ordering a sixth glass of our favourite from the tasting. While this was probably our most expensive activity we did in Budapest, it was still reasonably priced in Canadian terms. It was well worth the experience. Mmm.

By the time we stumbled out of the wine cellar it was starting to get dark. We walked along the Fisherman’s Bastion again for a different experience with it (and the city) all basked in a soft lighting against the night sky. 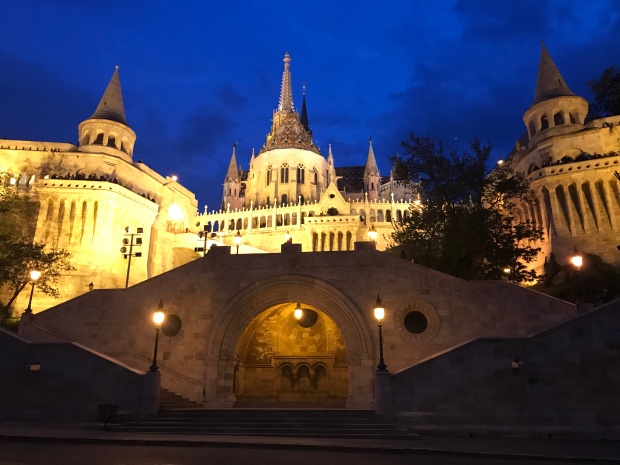 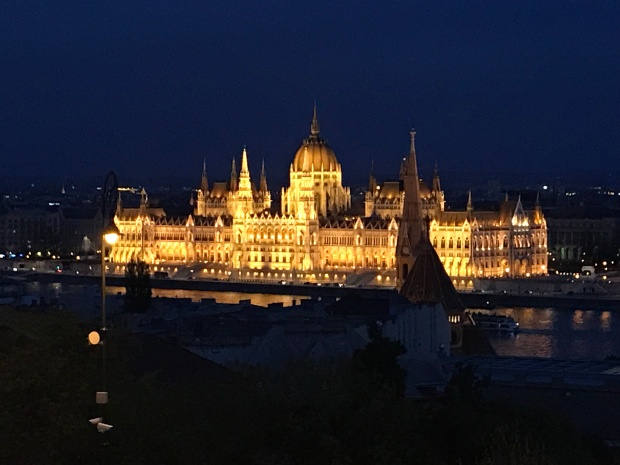 Day 3: The rest of Budapest

It cooled off quite a bit overnight. And the promise of rain lurked on the horizon. We had initially changed our itinerary so that we could spend most of our time indoors for our final day in Budapest because of the weather. But we foolishly didn’t take into consideration that our visit coincided with Easter and many of the museums had different opening hours because of that. Turns out many of the museums we were planning on visiting were closed today (there will be more whining on this later).

We started our day back at the Buda Castle District and went inside Matthias Church this time. 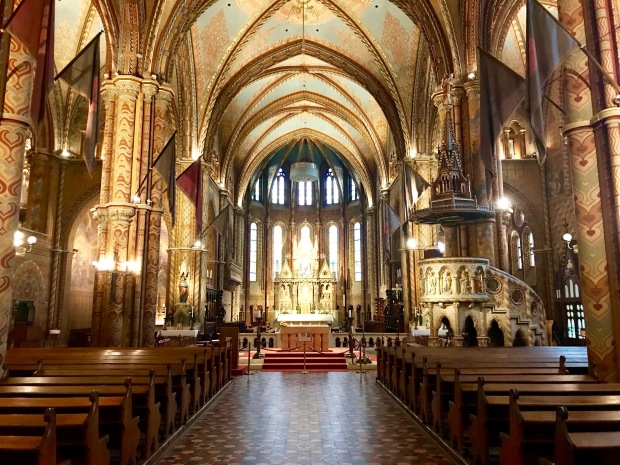 Afterwards we wandered over to Buda Castle. Back in the day it used to house the Hungarian kings. Nowadays, it houses the Hungarian National Gallery and The Budapest History Museum. But it turns out that both the gallery and museum were closed today. We were not very impressed.

Instead we walked around the grounds a bit more before heading around the corner to  The Hospital in the Rock Nuclear Bunker Museum. The hospital was built underneath Buda Castle in an extensive natural cave system during the Second World War and siege of Budapest. Following the end of the war, the hospital was used to produce vaccines before re-opening its doors to the public as a functioning hospital again at the start of the Revolution. It was further expanded and transformed into a nuclear bunker. The hospital was never formally decommissioned, but in 2007 it became a museum and opened its doors to the public.

By the time we left the museum it had started to rain outside. We walked back along the Chain Bridge and headed over to St. Stephen’s Basilica, the largest church in Budapest. The basilica was named after the first king of Hungary whose supposed right hand is kept in the reliquary.

The church is free to enter, but we decided to pay the extra couple of dollars to climb all 364 steps of the tower. Since it was raining, we figured the top of the tower wouldn’t be very crowded. And it wasn’t. The dome’s observation deck provided sweeping views around Budapest. 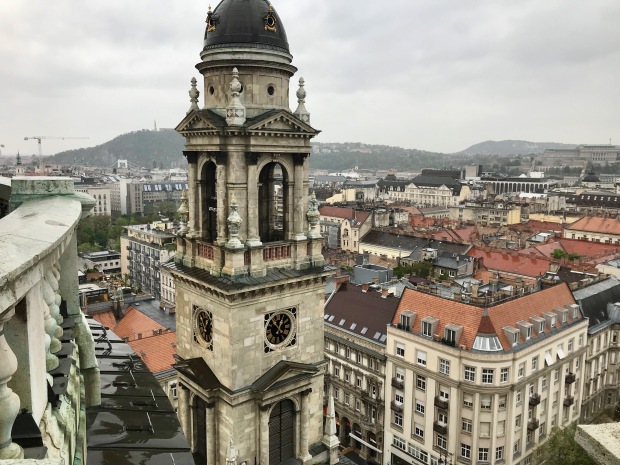 Afterwards we headed back to our accommodations, picking up some lunch along the way. We rested our legs for a bit before heading back out to the House of Terror Museum. There was a long line of people that wrapped around the side of the building by the time we arrived. And so our expectations were pretty high. If there’s a line, it must be good. But it turns out that the only reason there is a huge line was because there were only two people working at the ticket counter.

The museum contains exhibits relating to the fascist and communist regimes in the 20th century Hungary. The building itself served as the former headquarters of the ultra-right party and the museum commemorates the victims tortured or killed inside. Maybe it’s because there were no audioguides available by the time we purchased our tickets or maybe because many of the signs and plaques inside were only in Czech, but we found the museum very underwhelming.

Since it was still cold and rainy by the time we finished up at the museum, we decided to just stop by a grocery store and pick up some food for dinner rather than eat-out at a restaurant. Besides, this gave us more time to just unwind and pack since we were planning on taking an early train to Brno tomorrow morning.