The White Mountains is one of the best places in New England to enjoy the great outdoors. Especially in the fall when the leaves are changing colour. This mountain range encompasses about a quarter of the state of New Hampshire and a portion of western Maine. Every fall thousands of tourists flock here to experience some of the best fall foliage New England has to offer.

Day 1: The View from Above

We woke up bright and early and left a gloomy-looking Boston behind just after 8:30a.m. By the time we left the city, the skies were starting to clear up. A couple of hours later we reached the White Mountain National Forest. The skies were blue and fall was in fall swing. This is our favorite time of year to hike. And based on the amount of vehicles in the area, the same could be said about a lot of other outdoor enthusiasts.

We followed the signs for Flume Gorge and parked along the side of Highway 3 behind a long line of other vehicles. We ate a quick bite to eat before embarking on our hike up Mount Pemigewasset (4.8km roundtrip). We hopped over the guard rail and scurried down a hill to get to the start of the trail head.

The start of the trail is deceptively gentle and passes through a couple of tunnels underneath the highway. We continued to follow a series of blue blazes across a couple of bridges, over many many rocks, and around some steep switchbacks. With an elevation gain of 1,300 feet, don’t expect many flat sections, because there aren’t any. It’s a constant uphill hike up the side of a mountain. By the time we reached the summit we were a huffin’ and a puffin’ – obviously from the higher elevation of course. Rated as a family friendly hike and one of the easier trails in the Franconia Notch area we were completely humbled by this experience. But it’s entirely worth it as the views from up top were absolutely breathtaking – especially in the fall. 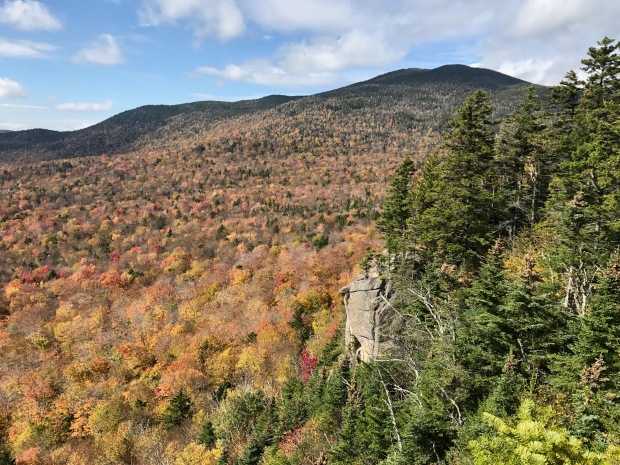 By the time we returned back to our car it was around 2:30p.m. We ate a quick snack before heading down the road to Lafayette Place Campground to secure a campsite. While we do our fair share of camping throughout the year, this was our first time camping in October. Perhaps because we’ve had such an unseasonably warm autumn, but temperatures overnight were actually warmer than some of our other summer camping adventures this year. And it wasn’t raining. Plus it doesn’t hurt that Lafayette Place Campground was one of the nicer campgrounds we’ve ever stayed at – in large part because of the beautiful fall foliage.

While we were checking in at the campground we asked for some recommended hikes in the area for tomorrow as well as directions to the Lost River Gorge & Boulder Caves. A few months prior we signed up for a Lantern Tour that involves exploring these rugged caves at night by the light of lanterns and headlamps. Sounds pretty awesome, right? Except apparently there was a fire in the area a few weeks ago and the Lost River Gorge & Boulder Caves closed indefinitely for the season. And I guess they didn’t bother to let people know who signed up for the evening Lantern Tour tonight. Glad we found this out prior to driving up there though. Not that it’s a far drive from the Lafayette Place Campground or anything. Except that we kinda planned our late afternoon / evening around this. And let’s be real, we were kinda really looking forward to exploring these caves.

Instead we drove down to Laconia for their annual pumpkin festival. It was definitely kinda gimmicky and there were carnies everywhere. The tower of carved pumpkins was pretty impressive. We did a couple of laps around the grounds weaving in and around the crowds of people before heading back to our campground for dinner. 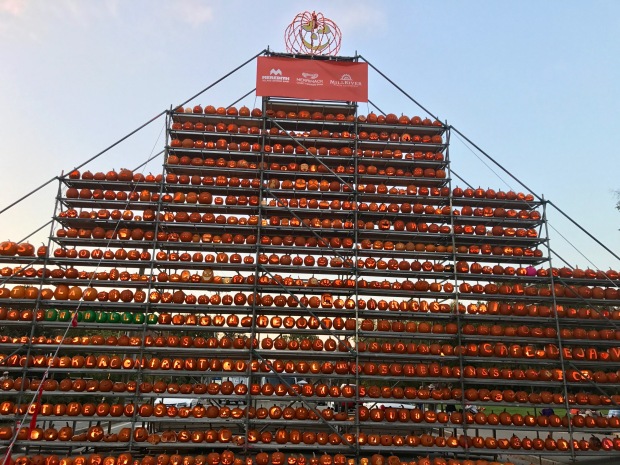 We woke up to a blanket of leaves on top of our tent. Temperatures were quite mild overnight and we woke up to a balmy morning with low overhanging clouds. We scarfed down a quick breakfast that consisted of oatmeal and banana before embarking on a hike up to Lonesome Lake (5km roundtrip – includes the loop around the lake) in an effort to beat the crowds.

The trail head is conveniently located near the end of the campground. And based on the number of cars parked along the side of the road yesterday we knew this trail not aptly named. Don’t be fooled. Needless to say, we were eager to get a head start so we can hike with minimal people around – the way hiking should be.

We followed the series of yellow blazes upwards. And yes, this may sound completely counterintuitive to have to climb upwards to get to a lake. As we continued to maneuver upwards over rocks and roots the thicker we ascended into the misty fog. And when we finally reached the summit, I mean lake, we nearly missed it entirely if it wasn’t for a cluster of other hikers standing near the shoreline who pointed it out.

We continued along the trail that hugs the shoreline of Lonesome Lake. This portion of the trail is relatively flat and consists of walking along wooden planks for the most part. The trail loops back to the start of where we first came into the view of the lake and we returned the way we came back to the campground.

Once we returned back to our campsite we packed up our sleeping bags and sleeping pads and tore down our tent. We piled everything in our car and began the drive back to Boston. We made a brief detour at the Basin shortly after checking out of the campgrounds.

We followed the short path from the parking lot that is paved most of the way down to The Basin. Along the way the trail provides excellent viewpoints of the river and smaller waterfalls that eventually trickle into the Basin.

Formed thousands of years ago from the erosion of water sloshing down into this inlet the Basin today resembles a smooth circular basin of water.

From there we continued our drive back to Boston. We made one other detour at a nearby farm along the way to pick a couple of pumpkins. From there it was just another hour to get back home. We later carved these pumpkins in preparation for Halloween.

12 thoughts on “Hiking in the White Mountains”